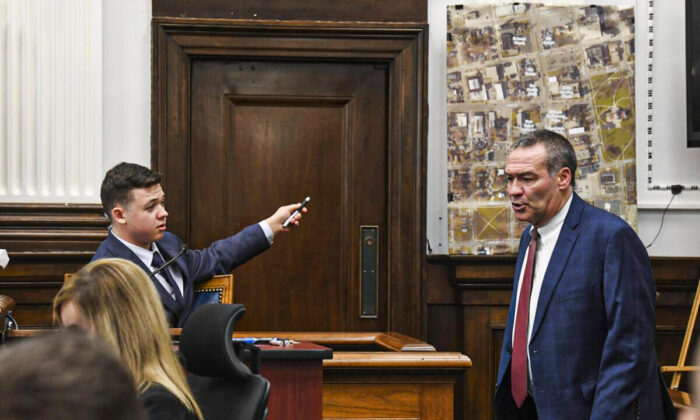 Rittenhouse Lawyer: ‘Scary’ How Many Death Threats Were Received During Trial

After a jury acquitted Rittenhouse, 18, of all charges brought against him, Richards told reporters after the verdict that “everybody in this case” faced death threats.

“And when I say that I mean prosecution, defense—to me it’s scary how many death threats we’ve had,” he remarked.

The lawyer recalled one instance when he answered his phone while on the way home from the Kenosha Courthouse and received a death threat. After the third one, Richards said he stopped answering his phone calls.

There were also unconfirmed reports that Judge Bruce Schroeder and his children received death threats throughout the trial. Schroeder did not make mention of it during the trial, and the Kenosha Police Department didn’t issue a statement on the matter.

Richards on Friday responded to questions about whether Rittenhouse should have waived his Fifth Amendment right and testified last week.

“At certain points we wondered whether we would put him on. We had a mock jury and we did two different juries, one with him testifying and one without him testifying. It was substantially better when he testified,”  Richards told reporters.

“But in Wisconsin, if you don’t put a client out on the stand, you’re going to lose. Period,” Richards added, without elaborating.

Rittenhouse was charged with the shooting deaths of two men and injuring a third on the night of Aug. 25, 2020, in the midst of protests, riots, and violence. For the most serious charge, Rittenhouse had faced a mandatory life sentence.

Last week, Rittenhouse testified that he believed that the man he shot first, Joseph Rosenbaum, charged him and attempted to wrest away his AR-15-style firearm, which was mostly corroborated by several videos of the incident.

“If I would have let Mr. Rosenbaum take my firearm from me, he would have used it and killed me with it and probably killed more people if I would have let him get my gun,” Rittenhouse said under cross-examination. “I didn’t intend to kill them. I intended to stop the people who were attacking me,” he also told the courtroom.

Prosecutor Thomas Binger, however, claimed that grainy drone-captured video evidence showed Rittenhouse pointing his firearm at protesters and argued that the teenager provoked the crowd, meaning he could not claim self-defense under Wisconsin law.

After the verdict was rendered, Binger said Friday that while his team is “disappointed with the verdict,”  the jury’s decision “must be respected.”

“We are grateful to the members of the jury for their diligent and thoughtful deliberations. The Kenosha community has endured much over the past 15 months, and yet we remain resilient and strong. We ask that members of our community continue to express their opinions and feelings about this verdict in a civil and peaceful manner,” Binger said in full.