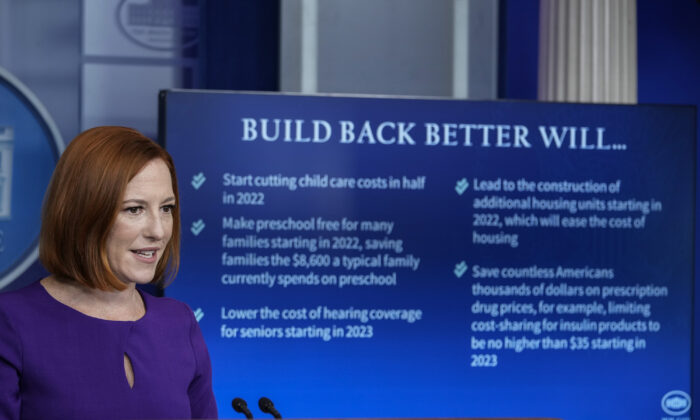 White House Press Secretary Jen Psaki told reporters at a Nov. 12 briefing that rising gasoline prices—which are up around 60 percent from a year ago—are a strong argument in favor of more government spending on green energy solutions, while dismissing suggestions that the Biden administration’s policies like halting new oil and gas drilling leases were causing pain at the pump.

“The rise in gas prices over the long term makes it an even stronger case for doubling down our investment and our focus on clean energy options so that we are not relying on the fluctuations and OPEC and their willingness to put more supply and meet the demands in the market,” Psaki said at the briefing.

Psaki was responding to a question from a reporter who noted that Republicans, in particular, have blamed President Joe Biden’s policies—including canceling the Keystone XL pipeline permit and freezing new oil and gas drilling leases on federal land and water—for contributing to a rise in gasoline prices.

According to AAA, the national average gasoline price on Nov. 11 stood at $3.414 per gallon, up around 60 percent from the previous year’s average of $2.130 per gallon.

The press secretary added that the administration’s focus with regards to rising gasoline prices has chiefly been to ask the Federal Trade Commission (FTC) to investigate possible instances of price gouging and to call on the Organization of Petroleum Exporting Countries (OPEC) and its crude-producing allies, dubbed OPEC-plus, to pump more crude.

But the cartel has rebuffed calls from the Biden administration, and others, to ramp up crude production more sharply. At a Nov. 4 meeting, the consortium voted to gradually raise crude production by 400,000 barrels per day each month.

Psaki added that, while “certainly there are a range of other domestic options” to help reduce prices at the pump, she didn’t have “anything to preview at this point in time” in this regard, with her response following a question about whether the Biden administration was considering releasing barrels from the Strategic Petroleum Reserve.

Pressed on the broader issue of inflation, which is running at a near 31-year high, Psaki acknowledged “big, big costs on people’s households” adding that its “certainly of concern to the President.” At the same time, she said that a “vast majority” of outside economists predict that inflation will slow down next year.

Psaki also said that “economists across the board” agree that Biden’s infrastructure bill and his Build Back Better agenda “will ease inflationary pressure over the long term.”

Biden was presumably referring to an open letter (pdf) signed by over a dozen Nobel laureates backing his economic agenda, arguing that “it will ease longer-term inflationary pressures” because “it invests in long-term economic capacity and will enhance the ability of more Americans to participate productively in the economy.”

GOP lawmakers are opposed to Biden’s spending agenda, with the Republican State Leadership Committee writing in a Nov. 13 tweet that, “the reckless spending spree of Washington Dems has resulted in skyrocketing inflation, a direct and debilitating tax on the lower and middle class.”

Rep. Warren Davidson (R-Ohio), a member of the House Financial Services Committee, told NTD News in a recent interview that the Build Back Better bill—along with other Democrat-led policies—represent a “potentially fatal overdose of government” that could stifle free enterprise and push inflation higher.

Psaki, in Friday’s briefing, accused Republicans of “screaming about inflation” and using the issue as a “political cudgel” while being uncooperative in searching for a solution to the problem, which she argued should come in the form of backing Biden’s big-ticket spending plans.