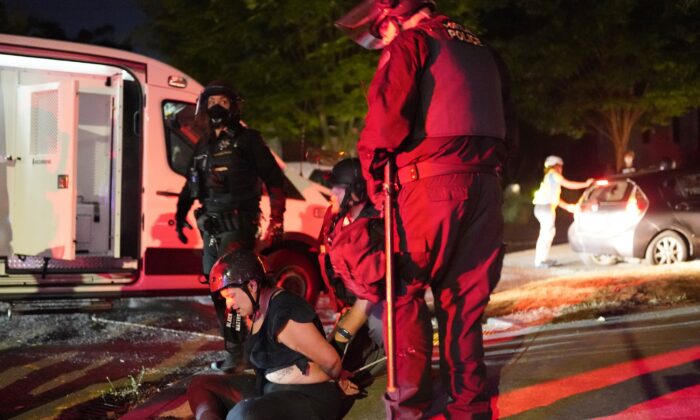 Portland police officers arrest a protester after dispersing a crowd of about 200 people from in front of a precinct for the Portland Police Bureau and Multonomah County Sheriff's Office in Portland, Ore., on Aug. 1, 2020. (Nathan Howard/Getty Images)
Crime and Incidents

Demonstrators in Portland, Oregon, hurled glass bottles and pointed lasers at police officers late on Aug. 1, prompting the declaration of an unlawful assembly and two arrests.

The city has been the scene of nightly unrest since May.

A group of about 200 people gathered on Aug. 1 in Laurelhurst Park, several miles east of downtown, where the Mark O. Hatfield Courthouse and the Justice Center have repeatedly been targeted during riots. The crowd marched, blocking traffic, about a mile east to the Penumbra Kelly Building, which houses law enforcement offices, before using vehicles to block East Burnside Street while shining bright lights, including lasers, at Portland police officers standing outside the building.

Eventually, the group began hurling glass bottles at the officers.

“A person in the crowd threw a glass jar or bottle filled with paint, which struck a Portland Police officer in the head. The officer was not injured,” the Portland Police Bureau said in an incident summary.

Because the mob declined to disperse, continuing to hurl projectiles, police declared an unlawful assembly and forced rioters to disperse.

An attempt to interfere with law enforcement operations by driving a car slowly in front of officers ended after officers deflated the vehicle’s tires.

When the crowd was dispersed away from the building, police disengaged and returned to the Penumbra Kelly Building, but a large portion of the mob circled back toward the building.

Police met the crowd again and began dispersing it. During this time, individuals with “press” written on their clothes again joined rioters in hurling projectiles at police. Police dispersed the crowd again, and the mob didn’t return to the building.

A separate march that started at the federal courthouse, and took approximately two hours, was peaceful, police said, and officers didn’t interact with that crowd.

The unrest came several days after city and state officials reached an agreement with the Trump administration that Oregon troopers would help quell the rioting. State and city officials failed to end the violence for weeks, and rioters started damaging the courthouse in early July. The Department of Homeland Security (DHS) sent assets to the city to help protect the courthouse and other federal properties, eventually erecting a fence around the building that has mostly stymied rioters.

Hours after the agreement was negotiated, federal officers declared an unlawful assembly and used tear gas to disperse demonstrators outside the courthouse.

The following evening, little law enforcement presence was seen. Demonstrators set fires and tried to take down the fence, but mostly milled about and listened to speeches.

“After weeks of violent rioting and nightly attacks, federal officers in Portland saw their first night of state and local law enforcement support and relative peace,” DHS said in a statement.

In the early hours on Aug. 1, demonstrators damaged property and set fires, burning American flags and Bibles. Again, little law enforcement presence was visible, and no arrests were made. The police bureau described the crowd as “subdued.” DHS said activity around the courthouse continued “in an overall trend of diminishing violence as a result of the increased cooperation between state and federal law enforcement.”

“While the violence is abating, DHS’s enhanced presence on the ground will remain for the time being until the Department determines that the courthouse and other federal property are safe,” it said in a summary of the nightly activity.

On recent nights, crowd size has dwindled from the thousands who gathered on some nights last month.