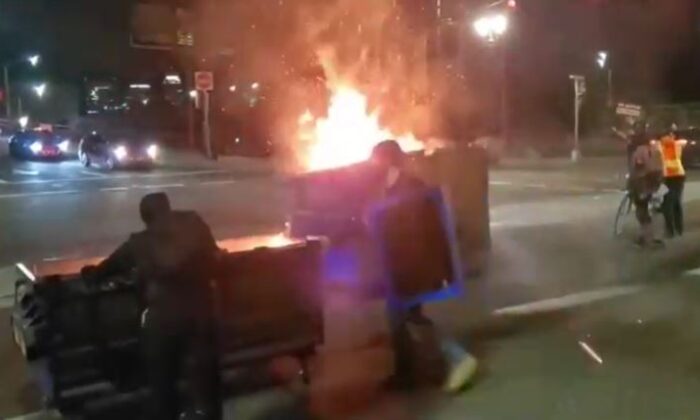 Unrest in Portland continued on Aug. 19 as a mob marched to an Immigration and Customs Enforcement (ICE) building and broke windows after assaulting police officers.

Crowds in the hundreds have been gathering on a nightly basis in Oregon’s largest city since May 28. On most nights, members commit acts of violence.

Recent events have been organized by PNW Youth Liberation Front, an Antifa-linked group.

People gathered in Elizabeth Caruthers Park in south Portland and marched half a mile to the ICE building.

“These people began shining lights and lasers at federal officers located inside of the building. Group members began kicking and banging on the doors and windows of the ICE building,” the Portland Police Bureau stated in an incident summary.

Because of the criminal acts, police, assisted by federal officers, issued warnings before dispersing the crowd with tear gas and munitions. While being forced to move away from the building, some rioters hurled projectiles such as softball-sized rocks and glass bottles at the police. Someone threw a hammer.

The dispersal was only temporarily successful. The mob made its way back to the ICE building and smashed windows, triggering another attempt to control the crowd.

Two people, Joshua Buckley, 30, and Mark Putman, 25, were both arrested for interfering with an officer and disorderly conduct.

Under a new policy from Multnomah County District Attorney Mike Schmidt, both will likely see their charges dropped.

Rioters the previous evening targeted a county building, setting it on fire, and over the weekend brutally assaulted multiple people, leaving one man unconscious.

Police Chief Chuck Lovell said hours earlier on Aug. 19 that he had a solution to the continued violence.

“We continue to get asked how this will end and how the violence will stop,” he said in a statement.

“The solution is in a critical mass of community and partners coming together to denounce this criminal activity and call it out as it does not represent what we know our community at large wants or values. The solution includes broad support for the police to do their job in exhausting and challenging circumstances,” he wrote.

“The solution also includes elected officials and people in positions of power coming together in support of the real change, but against those who continue to feel empowered to act in a way that devalues our City with every brick thrown, every fire lit, and every crime committed.

“The stakes are high and the world is watching. We are on the national stage right now. I would much rather be known for being leaders in change rather than nightly violence,” he wrote.

A policing expert told The Epoch Times in July that city officials needed to get the violence in Portland under control or step down, particularly Mayor and Police Commissioner Ted Wheeler.

“The longer it’s tolerated, the more out of control it becomes, the harder it is to contain it,” said Maria Haberfeld, professor of police science at John Jay College of Criminal Justice.