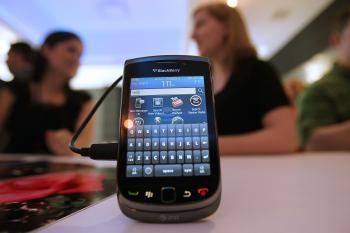 The new Blackberry Torch 9800 smartphone is seen after being unveiled at a news conference August 3, in New York City. (Mario Tama/Getty Images)
News

BBM is a popular mobile social network that allows users with the Blackberry Internet Service to send instant messages, pictures, and audio files to other Blackberry users with their cell phone network or when a wireless connection is available. The messages are sent using the Blackberry PIN, which is a unique code assigned to each Blackberry, so the BBM can only be used by Blackberry owners.

The BBM version 6 added a new feature that allows users to continue messaging when other apps are running through “BBM connected” apps. For example, BBM users can use connected game apps to chat and play games with friends simultaneously.

RIM hopes that more developers will create apps for the network with the introduction of BBM 6 as Blackberry has much fewer apps compared to Apple and Android. Huffington Post, Wikitude, and Foursquare are among some of RIM current partners.

“BBM 6 marks the beginning of an even greater social experience for BlackBerry smartphone users,” said RIM Vice President Alistair Mitchell. “It also represents an incredible opportunity for developers to leverage the viral nature of the BBM service and we have already begun working with various developer partners who will be bringing their BBM connected apps to BlackBerry App World this week, offering users highly engaging app experiences.”

In addition, the Canadian company also hopes that BBM 6 will help Blackberry regain popularity, according to Reuters. Once the most popular smartphone, the Blackberry has lost its throne to the the iPhone and Google’s Android.

"This is a good transition for the company but it’s not without competition from competitors big and small," said Strategy Analytics analyst Josh Martin.

RIM’s strongest competitors also have their own networking system that have similar feature to BBM 6, therefore an updated social network system may not be enough to stop RIM sliding popularity and market shares.

"Is the next BBM alone the answer—certainly not—but taken with other offerings it could create the foundation for an improved experience,” says Mitchell.