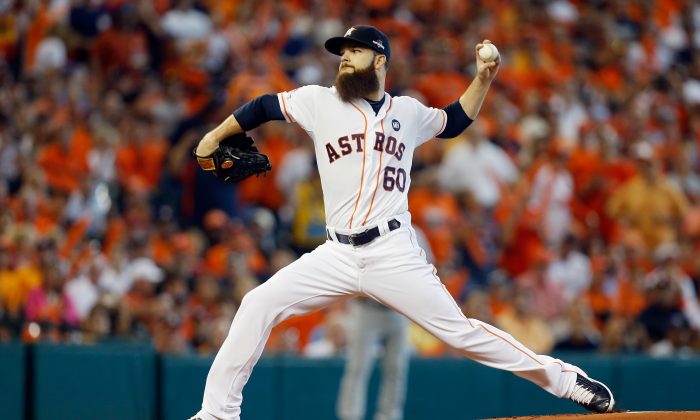 Fortunately, for Houston’s World Series title-winning chances, this is the time of the season where having such a dominant No. 1 starter is so important. Though in the regular season a starter only pitches one in five games, the off-day filled postseason is another story. One dominant starter can make a huge impact in a single series.

And Keuchel has done that in both series, thus far—with possibly more chances on the way.

After shutting down the Yankees in the wild card game at Yankee Stadium for six innings last week—on just three days rest—the lefty followed that up by miraculously navigating his way through seven turbulent innings Sunday against the Royals for the win.

The probable Cy Young winner walked three and allowed five hits—three of them for extra-bases—yet allowed just run to cross the plate as Houston won 4–2.

Although he didn’t consistently have his best stuff, he came up with every time it mattered.

Nine times Kansas City hitters came up to bat with a runner in scoring position against Keuchel and, other than an intentional walk, the Royals came away empty-handed every single time. Only a solo home run by Lorenzo Cain kept them from being blanked by the guy who’s been almost unhittable (15–0, 1.46 ERA) at home this season.

In a way, Kansas City’s strategy of working the count against Keuchel eventually paid off—he was finally pulled after a whopping 124 pitches—but Houston’s bullpen finished the job by allowing just one run over the final two innings.

Yet maybe the thinking by Kansas City was that the high pitch count will keep him from making an appearance in a winner-take-all Game 5, though.

Of course, that’s probably what the Royals thought last year before seeing Madison Bumgarner single-handedly down them in the World Series last year.

In last year’s Fall Classic Bumgarner, also a dominant left-hander, shut the Royals down in Game 1 (seven innings, one run) and then again in a Game 5 117-pitch complete game shutout. Despite the heavy workload, Bumgarner still came on as a long reliever in Game 7—on just two days rest—and pitched the final five innings without letting up a run in a thrilling 3–2 Giants win.

Keuchel’s early postseason numbers this year (2–0, 0.69 ERA) favor comparably with Bumgarner’s last year (4–1, 1.03 ERA) but whether the Astros decide to subject him to a Game 5 relief outing—on just two days rest—remains to be seen. Bumgarner had the whole offseason to recover.