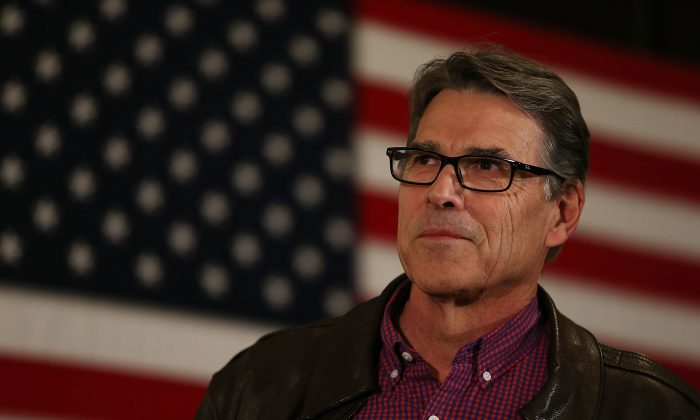 Once called Trump a 'Cancer to Conservatism'
By Steven Klett

The endorsement is surprising given Perry’s criticism early in the primary season.

When Perry was running as a Republican candidate, he wrote a long 3,000 word speech entitled “Defending Conservatism Against the Cancer of Trump-ism.” In the speech, Perry made sweeping statements about the presumptive nominee saying:

“Donald Trump is the modern-day incarnation of the know-nothing movement.”

Now, with Trump as the Republican party’s presumptive nominee, he’s changing his tune.

“He is not a perfect man. But what I do believe is that he loves this country and he will surround himself with capable, experienced people and he will listen to them,” Perry said in his endorsement.

“He wasn’t my first choice, wasn’t my second choice, but he is the people’s choice,” Perry added.

When asked whether or not he would be open to the slot of vice president, the former Texas governor said that he was “open” to helping the presumptive nominee:

“I am going to be open to any way I can help. I am not going to say no,” Perry said.

The endorsement comes shortly after Speaker Paul Ryan and other Republicans have refused to lend support to the party nominee following a knockout win in the Indiana primary.

The former Governor of Texas dropped out in September after 100 days and a disappointing fundraising effort.

“The conservative movement has always been about principles, not personalities,” Perry said after dropping out.

“Our nominee should embody those principles. He—or she—must make the case for the cause of conservatism more than the cause of their own celebrity.”

Rick Perry was Governor of Texas for fourteen years and shot up to national attention after making a more vigorous, but unsuccessful attempt at being the presidential nomination in the 2012 cycle.

Perry also endorsed and campaigned for fellow Texan Ted Cruz before Cruz dropped out of the race following a loss in the Indiana primary.

Donald Trump responded to Perry’s endorsement with gratitude, tweeting his thanks to the former governor:

Governor Rick Perry said “Donald Trump is one of the most talented people running for the Presidency I’ve ever seen.” Thank you Rick!