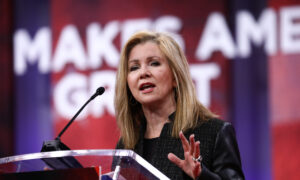 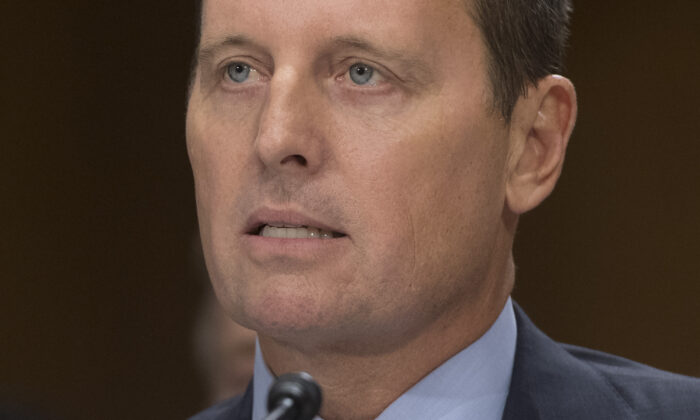 Richard Grenell, nominee to be U.S. ambassador to Germany, testifies during a Senate Foreign Relations Committee hearing on Capitol Hill in Washington on Sept. 27, 2017. (Saul Loeb/AFP via Getty Images)
Viewpoints

Richard Grenell, a True Hero of Our Times

You may have noticed, as a mere citizen of this country, there are many things you are not supposed to know.

You are not mature enough or intelligent enough to handle certain information. You are, in effect, a child in a supposedly democratic republic.

When Congress wishes to interview key players on a matter of significance, they first, and often only, do it in camera so you infants aren’t allowed to hear the truth as it emerges under oath.

The result? In public, you are lied to, repeatedly, until you are constrained to believe the lie that is being echoed endlessly by the media.

Most of us, therefore, regard our nation’s capital as the epicenter of obfuscation and prevarication, a place where you can’t find an honest man, and if you need a friend, as Harry Truman said, you should get a dog.

This is nothing new. It goes back at least to Ancient Greece when Diogenes of Sinope wandered the Peloponnese looking for that honest man. (He, in reality, was it.)

America in 2020, in the midst of a pandemic and a fateful presidential election season that may determine whether our future is free-market capitalism or socialism, has found its Diogenes just in the nick of time.

His name is Richard Grenell, formerly U.S. ambassador to Germany and, before that, spokesperson for various U.N. ambassadors and now acting director of national intelligence.

Grenell, that ingrate, decided that we weren’t so stupid after all and were able to determine the truth for ourselves if given access to the facts. So he marched testimony, heretofore hidden, due to the restrictions of one Rep. Adam Schiff (D-Calif.), regarding the Trump–Russia probe over to another potential Diogenes (William Barr—two for the price of one), and the rest is emerging history.

What are we discovering so far? That the aforementioned Mr. Schiff is a serial liar verging on the pathological is something of a yawner at this point.

Much more important—wedged between a slew of “leaders” who apparently said one thing in public and something entirely different under oath—is the following, well explained by Zachary Stieber on this outlet:

What? The nascent Trump administration was being spied on by …

Cutting to the chase, we are already in the land of “what did the president know and when did he know it” for a scandal that far exceeds Watergate because it involves a potential coup. More is certainly to come, with the reputation of the Obama administration hanging by a thread.

But back to the man who forced the truth to come out after three years of purposeful delay—Richard Grenell.

I am proud to say Ric is a friend of mine from L.A. days and can assure readers he’s a great guy, funny, very knowledgeable about the arts, and generally intellectually brilliant.

He is also the first openly gay person to serve in a cabinet-level position, which is totally immaterial, but I add admittedly to get the goat of our “liberal” friends for whom such tawdry identity politics has tremendous importance for reasons that are at heart completely reactionary.

Far more important is that Ric had cancer and bravely beat it. Yet more important than that are the terrific, courageous, and unprecedented things he did as ambassador to Germany, confronting German Chancellor Angela Merkel and the bureaucrats of the European Union and getting amazing results.

Among those achievements was Grenell’s role in banning Hezbollah in Germany, also in blocking Germany from sending $400 million to Iran’s mullahs. There’s much more from the Jerusalem Post’s man in Berlin, Benjamin Weinthal, who has done an admirable job of covering Ric’s activities before President Donald Trump brought him back to Washington to serve as acting director of national intelligence.

The president must have known it was time for a Diogenes, an honest man to open the books, be transparent, and reveal the truth of what’s been going on in the last few years. That’s something to celebrate. But don’t just say it, sing it!

Roger L. Simon is The Epoch Times’ senior political analyst. He is also the author, among other books, of “I Know Best: How Moral Narcissism Is Destroying Our Republic, If It Hasn’t Already,” published in 2016 but just featured on The Rush Limbaugh Show. It’s still available on Amazon.