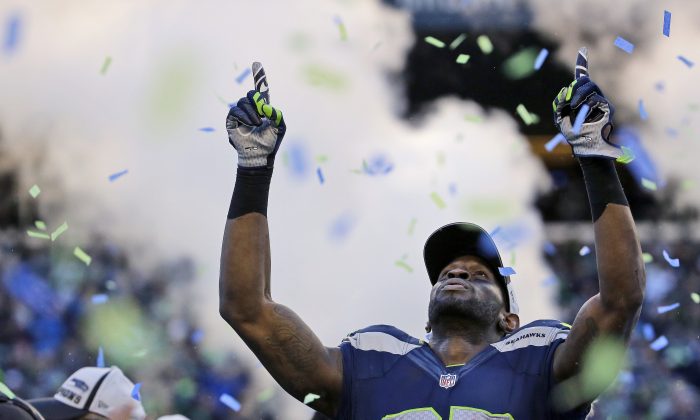 Scroll down to watch
By Jack Phillips

3 different video angles of the scary Ricardo Lockette injury. He was knocked out cold. https://t.co/e3IP6j7lnL https://t.co/oQb8jAoE1g

According to the Fox broadcast, Lockette is now moving, and he has suffered a concussion on the hit. They said he’s got “full movement” in his limbs.

Lockette appeared to be knocked out cold after taking a hit from Dallas Cowboys safety Jeff Heath.

Great to see as @RicardoLockette was carted off the field. pic.twitter.com/1qNDqdkZcG

He was taken to the hospital for a medical exam. He was carted off the field after both teams’ medical personnel attended to him. On his way off the field, he pumped his fists and gave a signal to fans.

Seahawks coach Pete Carroll, after the game, said Lockette will stay in Dallas overnight and said he’s encouraged by the preliminary results.

The cart is near midfield to help Ricardo Lockette off the field. pic.twitter.com/8ihZtC64zt

Stretcher on the field for Ricardo Lockette. AT&T Stadium is silent. pic.twitter.com/BVmuhKdlwM

Lockette laid motionless on the ground after the incident. Medical staff brought out a stretcher to take him off the field.

Seahawks and Cowboys players gathered around him and many took a knee.

Ricardo Lockette takes shot to the head during punt. Down. #SEAvsDAL

Scary scene in Dallas. Seattle WR Ricardo Lockette is down after a collision during a punt.

Prayers up for @RicardoLockette please. Love you bro!!!

Scary stuff in Arlington, Ricardo Lockette takes a hit on special teams and wasn’t moving when he hit the ground

Ricardo Lockette down and lots of players rush quickly on field.