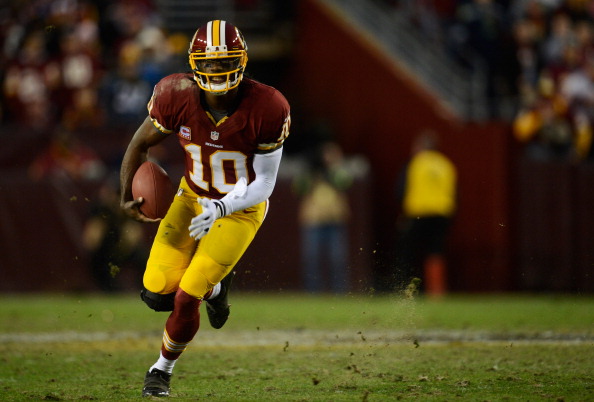 Robert Griffin III of the Washington Redskins runs the ball against the Seattle Seahawks during the NFC Wild Card Playoff Game at FedExField on January 6, 2013 in Landover, Maryland. (Patrick McDermott/Getty Images)
NFL

RGIII cryptic tweets: Washington Redskins quarterback Robert Griffin III posted a series of cryptic tweets this week, triggering speculation if they are linked to the D.C. City Council’s criticism of the name of the team.

“You ever say something & people interpret it a certain way but you didn’t mean it that way but meant it how you said it??? Yea…” he said on his Twitter account on Tuesday.

He added: “‘The few’ will always post pics & make fun of the injured. Don’t let it cloud your judgement when it comes to the good in this world.” He later said, “In a land of freedom we are held hostage by the tyranny of political correctness.”

It is unclear as to what Griffin was tweeting about but Jay Busbee with Yahoo Sports speculated that it was triggered by the Washington D.C. City Council’s initiative in forcing the Redskins into changing the team name to the “Washington Redtails.”

Regardless of what he is referring to, Busbee says, “when he speaks (or tweets), people listen. It’s a heavy responsibility for someone of any age.”

Griffin later tweeted on Wednesday: “You can twist it, spin it, and try to find the basis of your next article in the words of anything that anyone says.”

“We have to change it, and I’m calling on [owner] Dan Snyder and the NFL to step up and do the right thing,” council member David Grosso, told The Washington Examiner. He suggested the team should call itself “Redtails.”

“I just don’t want it to be offensive, and at the end, what I’d love to call them is world champions,” he added.