Rex Murphy: The Liberals’ Stance on Ford’s Use of Notwithstanding Clause Oozes With Hypocrisy 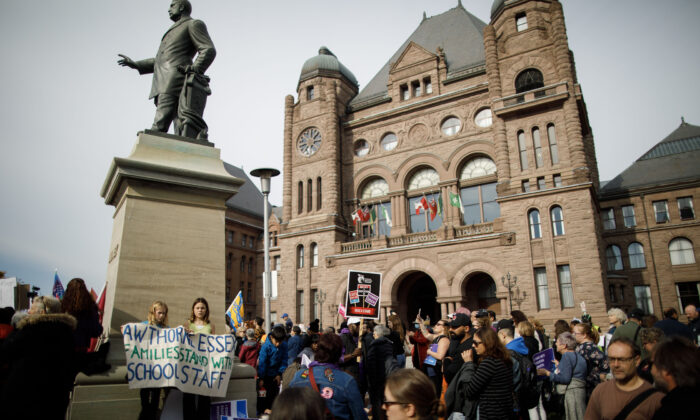 CUPE Ontario members and supporters wave signs and flags as they demonstrate outside the Queen's Park Legislative Building in Toronto on Nov. 4, 2022. (The Canadian Press/Cole Burston)

Ontario is a peculiar place.

There have been two full years of school closures—of dubious necessity—and now that the COVID regime has finally been lifted, just as children are getting settled back into regular class time, what happens?

Why, there is a strike of course. The great CUPE union has called a strike for school workers, originally demanding a mere 11 percent per year for the next four years. Premier Doug Ford, mindful of parents who have been tormented and exasperated by Zoom learning (and their children denied all normal childhood social interaction), threatens to use the “notwithstanding clause” of the revered Charter of Rights and Freedoms in order to slap the strike down as soon as it takes its first irritating breath.

He can read the Ontario room, that is unquestionable. Two years off on salary for teachers, while small businesses went bankrupt, Costco and the big boys made out like bandits, and restaurants in particular went down like dominoes, but as soon as what we used to call normal conditions return, the union (as of Nov. 4) calls a strike.

Shouts of horror from Ottawa, the prime minister, the Liberal front bench, and a particular intervention from Seamus O’Regan, the Plato of cabinet, that “using the notwithstanding clause to suspend workers’ rights is an affront to democracy.”

It’s gutting the charter, they all cry. It hits the basic right to “collective bargaining”—a right, as the most keen Howard Anglin perceptively argued in a commentary for The Hub, was manufactured in the courts and is not in the charter.

How the Liberals manage to stay conscious when executing so hypocritical a position is a question for the medical authorities. The Liberals put on the COVID regime. They waltzed over, through, around, and under the charter; I think I wrote previously they drove an 18-wheeler with no brakes through civil liberties. And that was just their warmup.

Was it so long ago that during a democratic and peaceful protest in Ottawa—no violence, no storming of Parliament, no vile threats—Mr. Trudeau (I would presume gleaning the fawning admiration of Mr. O’Regan “Oh Captain, my Captain”) brought in the Emergencies Act? Which froze bank accounts, interfered with the legitimate raising of funds for the truckers’ protest, and took away people’s civil liberties in all parts of the country.

It was the first time in history that a Canadian federal government—without clear justification, and from the testimony so far into the public inquiry, more from confusion than threat—invoked the Son of the War Measures Act and put a steel lid on any civil rights that normally we enjoy.

These are now the “folks”—that’s a term I borrow from Obama, the always homely speaker—whining and screaming that a provincial premier is calling upon the notwithstanding clause, which is itself an element of the Charter of Rights and Freedoms, deeming it an “affront to democracy” and an invasion of Canadian liberties.

You do not have to be a great supporter of the Liberals to admire their gall, their sheer “face,” to use a Newfoundland term. This, recall, is also a minority administration that has worked a deal with the NDP’s super-compliant Jagmeet Singh to act as a majority government. If you are looking for a real “affront to democracy,” check the political nuptials of Singh-Trudeau.

That embrace has stripped the House of Commons—which Mr. Trudeau turned into a Zoom cable station throughout COVID—of its most essential power: demanding a non-confidence motion.

Now that they see a glimmer of political advantage in attacking a provincial premier (as of course a sly way of needling Pierre Poilievre) they are all King Arthur and the robotic Knights of the Cabinet Table, “standing up” for Canadians’ civil liberties.

Professional contortionists, who used to be circus stars based on their ability to bend and twist and convolute themselves with the ease of a strand of overcooked spaghetti, have to look on the Liberals with envy and despair. They could never curl with this ease.

This Liberal government, after the restrictions and mandates of COVID, after the vast over-extension of state power granted by the Emergencies Act, now wants to pose, preen, and posture as champions of civil rights. And cast Poilievre, for not denouncing Doug Ford—who was the Liberals’ chief supporter during their COVID phase and their invocation of the Emergencies Act—as careless on civil liberties.

It is a magnificent twist.

There are times when gall is so pure, when hypocrisy is so perfect, that it is necessary to stand back and say: This is outstanding. This is so completely shameless and totally without embarrassment that some great artist should paint the moment. It should be memorialized. Either a painting or a statue in marble.

Politicians have danced around their own behaviour for centuries, made promises that did not survive the passing of the breath that uttered them. But for this government to pose as alarmed by their Ford ally committing an “affront to democracy” by invoking the notwithstanding clause is a special moment.

Positioning itself as a defender of the charter, after these last two years and after hauling out the Emergencies Act, is a pure sunset-splendour of hypocritical behaviour.

It stands alone. It is special. Only the dance spectacular during the great India tour can offer competition.

Rex Murphy
Rex Murphy is an author and columnist, and a former CBC Television and CBC Radio host.