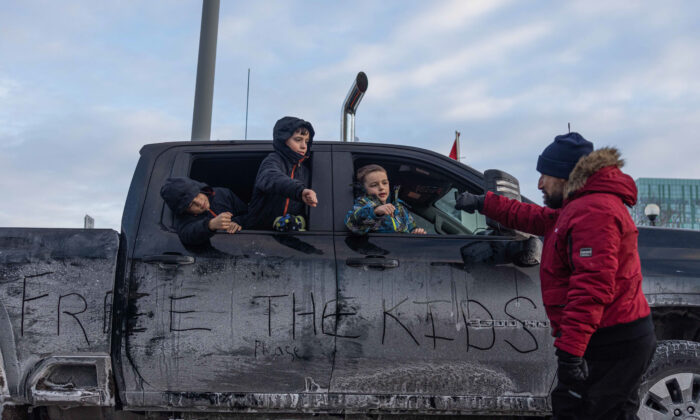 Children lean out of a vehicle to fist-pump a passing protester, in Ottawa on Jan. 30, 2022. (Alex Kent/Getty Images)
Viewpoints

“COVID has shown government officials how to do an end-run around the normal system of checks and balances. They simply need to invoke ‘science’ and declare an emergency — and then extend their emergency orders time and again. Anyone who dares challenge the emergency orders will be stigmatized as ‘anti-science,’ or they will be told they aren’t scientists so they have no right to be heard,” writes John G. West in his commentary “The Rise of Totalitarian Science.”

“Regardless of your view of specific anti-COVID policies, policymaking during the pandemic has set a terrible precedent for the future. The genie of unaccountable government power in the name of science has been let out of the bottle. Will we be able to put it back in?”

During the months of full civic tumults and riots that plagued numerous U.S. cities in 2020, mainly the work of Black Lives Matter or the newly emergent curse of the oxymoronically self-named Antifa, the U.S. press was unwonted genteel in their coverage. Recall these mobs took over the central section of Seattle, set up “guards” to determine who could enter, nightly rolled through the downtown, and terrified residents of their liberated “Chazistan.” Businesses were attacked, saw murder and violence, and of course the riots were marked with scorn for and attacks on the police.

Residents of Seattle were, effectively, kept hostage in their own city, this in 21st-century democratic U.S.A.

The mayor of utopian Seattle, during an outbreak of pure lawlessness, put the capstone on the folly by describing it as the beginning of “a summer of love.” A statement—let me coin a word—of such “dim-wititude” that it should be inscribed on granite and put outside the municipal offices under a bust of the mayor. Elsewhere in so many other cities there were nightly rampages, attempts to burn down police buildings, “occupations,” vast destruction of property, and mass looting. The works.

Still the news media were, shall we say, comforting, or fully complacent, downplaying what was in front of their eyes. Everyone who followed the riots will recall the epic moment when a reporter—standing in front of a three-storey building that was one huge torch, flames leaping up into the night sky—gave the immortal judgement, on camera, live: “Fiery, but mostly peaceful.” He was employed by, of course—how could he not be—CNN.

There was six months of this, and the entire time the reporting of the riots and the looting was in the main cowardly, almost overtly supportive, and totally inadequate.

Here in Canada, we have had (as I am writing) six days of protest, in one city, and the dynamic is almost perfectly opposite. The protest has been actually not “mainly” but overwhelmingly peaceful, and the political and major press response wildly alarmist and ominous.

Ottawa shops remain with their windows intact, no assaults on police stations or police being bombarded with sticks and stones, no “armed patrols” by the truckers telling people where they could go or not go, and a splendid number of rather endearing incidents that have failed to make it to national or local press.

It’s a protest after two years of COVID lockdowns, shifting standards and policies, increasing overreach of governments’ authority impinging on the civil liberties of all, and a gutting of whatever protections our once-hallowed, now hollowed-out, Charter of Rights and Freedoms guaranteed. The truckers, early on in this crisis, were, like health staff and grocery clerks, praised as civil heroes, even by Mr. Trudeau himself, and the press. Truckers delivered the necessary foods and goods during the outbreak, their courage and sense of duty a tribute to the Canadian way of supporting people in a hard time.

However, two years in, bearing the weight of the “save the world” carbon tax, increasing COVID anxieties, and vaccine mandate policies imposed without consultation with those they most affect, when they decide they must protest and execute a two- or three thousand-mile trek to Ottawa to do so, they have been piled on with the most outrageous rhetoric from the very leaders and press which once lauded them.

Our great freedom-guardian press has sought out every minor incident—and there have been only minor incidents in a protest involving thousands—to brand and colour the whole movement, amplified all criticism, taking to calling the truckers “yahoos,” wildly exaggerating slights or perceived “threats,” and for the most part studiously avoiding giving anything like a reasoned and calm account of the concerns of the citizens who constitute the protest.

PM Trudeau, having removed himself and gone into protection (he caught COVID, after receiving the vaccines and the booster, which might be seen as undercutting the need to mandate them on others), announced in the most febrile terms that they were “misogynists, racists, and science-deniers.” Further, that they are a contemptible “fringe.” On Jan. 31 he was at it again: “We won’t cave to those who engage in vandalism …. There is no place in our country for threats, violence, or hatred.” Could he be trying to—deepest sin of the Wokery Church—“marginalize a minority?”

Mr. Trudeau’s tone and terms, his condemnatory invective, is completely out of proportion. He is deliberately stimulating polarization, painting a set of working-class Canadians—who rarely protest—as villains. And, I’ll claim it as a fact, that the men and women who drove halfway across Canada are not vandals, they are not racists; indeed they are just as most other working Canadians are. And it is shameful for a prime minister—who invokes tolerance as his number one virtue every time the clock ticks another second—to sound such intolerant rhetoric over one group of Canadian citizens exercising their due right to protest. Coming from a prime minister the attack is, to use a word he must know, deplorable.

A great swathe of the press is in tune with the Mr. Trudeau. They exude a superior attitude to those they report on, some are describing the protesters as an “occupying force,” and are most outraged by the “honking.” Dear me. A wave of vandalized and burnt churches last year received far more tepid moralizing.

Let me end with this observation from Glenn Reynolds, a keen and clear observer of American politics, in a column on the Ottawa moment in the New York Post:

“In Canada, the press even tried to pretend that the thousands of truckers driving to the capital city of Ottawa were actually Russian agents. When that failed, it fell back on its old standard, calling them fascists, Nazi sympathizers and white supremacists.”

There used to be a distinction between the press and the politicians. During this last week you would need a microscope in some cases to see it.