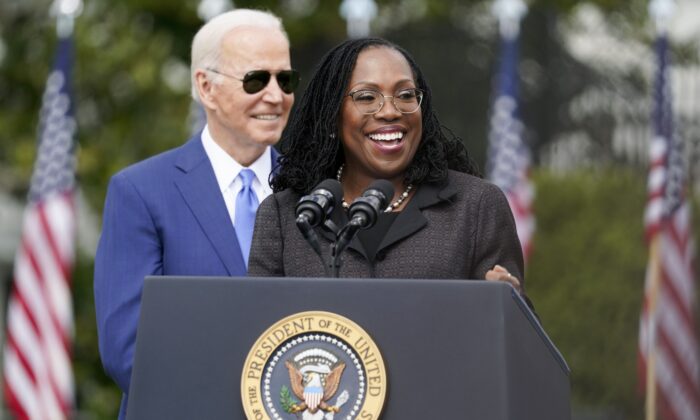 Rex Murphy: ‘I’m Not a Biologist’: The Strange and Fantastical World of Being Willingly Blind to Reality

The nomination of the latest U.S. Supreme Court judge is over and successful, but it will be some time before any reasonable person will be able to digest the most sublime moment of the hearings which preceded the elevation. That was when the first black female ever to be nominated was asked if she—the pronoun should be noted—could define a “woman.” Forgive a literary reference but the moment summoned to mind Francis Bacon’s famous opening of his essay “On Truth,” one of the greatest sentences ever to escape from a quill:

“What is truth? said jesting Pilate, and would not stay for an answer.”

In the case of Judge Ketanji Brown Jackson, it was not so much a refusal to stay as an astonishing confession of being unqualified to offer a reply. “No, I can’t,” was the then-nominee’s declaration, tagged by an explanatory balloon that she’s “not a biologist.”

All her years of—to call up the current cant tautology—“lived experience” with her status as a woman were evidently not sufficient for her to even venture an opinion. On a point which even a 2-year old, of either sex, is demonstrably clear, and hence the fluency with mom and dad in that age group, a fully adult person seeking elevation to a post that calls for the highest intellectual skills declared herself uncertain and at sea. It is as if she were asked to define a “chair” and declined due to not being a carpenter.

It was a moment deeply interesting in itself, but far more exhilarating as a parable—a parable exposing the strange moment so much of western society finds itself in, when the most basic understanding of the most basic and incontrovertible facts is either being denied, suppressed, or, by the Pharisees of puritan wokery, hailed as sexist, racist, or some other of the many fashionable “ist-isms” of our demented time.

May we agree that “What is a woman?” is not a subtle or trick question, that it does not call for strenuous or profound mental capacity when posed. And given the consideration that from the time that “personkind” (I owe Justin Trudeau for the novelty term) descended from the trees and learned to walk the African plains, it has presented no challenge to the understanding—and has had a universally recognized and ready answer—that the knowledge that one sex is different from the other has been as familiar as the distinction between night and day.

And yet, here in the high moments of the most advanced civilization since that descent from the trees, in a scientifically hyper-advanced society gifted with great institutions of learning and information resources beyond the dreams of even a generation ago, an expression of doubt on “what is a woman”—instead of arousing the deepest puzzlement and perhaps even scorn at such ignorance—now passes for a badge of progressivism, even of a kind of moral enlightenment.

Of course the good judge knows what a woman is. Outside the strange politics of the moment there’d be no hesitation, no denial.

She would certainly be clear were she to be denied entrance to some club or society because she is a woman, or if in her earlier career she had been denied promotion because she’s a woman, or if she had been sexually harassed by a male counterpart. Complaints would have been filed, lawsuits called into being, to assert her “right as a woman” to equitable treatment. There would have been no transparent and cowardly demurral then of “I don’t know. I’m not a biologist.” There would instead have been a righteous and powerful statement that “as a woman” I will not stand for this. It would have been all “I am woman, hear me roar.” The clamorous indignation of the #MeToo sorority would have been sounded to back her up. Male feminists would have leaped from whatever sensitive woodwork they hang out in to support her.

But here we are, in the age of the Large Hadron Collider, in a day when we send satellites to the moons of distant planets, and an egregiously educated woman declines to say she knows what a woman is.

Further, we are in a time when a professor of an executive in some company asserts the universal truth that men are men and women are women, that person is ostracized, driven off campus, fired from the New York Times for saying simply what everyone, and I mean everyone, knows is the case. We are in an age when a male swimmer simply says—merely declares on his own say-so—that “he” is a “she” and nine-tenths of the news media and every woke evangelist takes that declaration as a new truth, not to be contested, and submits to the farce of him entering swim races and propelling himself to the podium with the gold, while that other set of women—women who have been women since they were born—look on in gloom and hopefully anger.

Even in the days of darkest superstitions, even in the long night of human ignorance, humans in their very earliest moments understood that Reality—it needs the capital—was never subject to the simple declaration of an individual. You are not the “Queen of Romania” because you say you are. To say, is not to be.

DNA is not the subject of a passing mood. Chromosomes are not subjectively determined. You may surgically alter your body, but you cannot deny its nature, nor can or should you by self-declaration invite yourself into the sex you plainly are not.

How easily the West wanders into this strange and fantastical world. How a wild politics, which shuns reality and punishes and attacks those who support it, has taken hold of so many sad minds is truly an enigma. But it is much worse. To be willingly blind to reality is to voluntarily embrace the irrational. That such an embrace has gained such force at such heights as admission to the Supreme Court of the United States should be the greatest anxiety of our time.