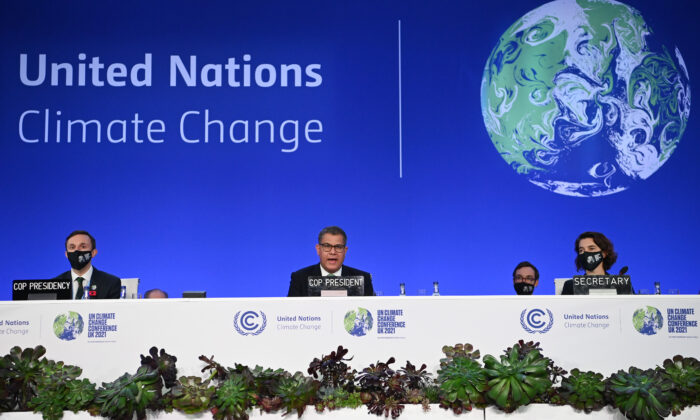 Rex Murphy: By Making Tyrants Strong, the Green Movement Has a Lot to Answer For

There have been about 30 of these gigantic environmental misery-fests known as the conference of the parties (COP) sponsored by the dreaded Intergovernmental Panel on Climate Change since the very early ’90s. And the volume of ego-display and hot-air release has only expanded with each one of them.

Ignore the hypocrisy of the damn things with their preening billionaires, yacht-dwelling movie stars, fat-chequed TV presenters, and lecture-circuit green celebs—mainly because the hypocrisy is too thick and the hypocrites too numerous.

What have they done, apart from sunning themselves under the TV lamps of the world’s mostly craven and obliging press, strutting around the huge luxury conference venues dropping their tired alarms about cow flatulence, offering rapturous incense to the soft-voiced whale-song of David Attenborough voice-overs, and receiving callow jeremiads from dropout grim Greta, the teenager and the nonagenarian of the Green Apocalypse, the Bat-Person and Robinette of the End Times?

Yes, what have they done? Name the singular, unchallengeable achievement of these elephantine conclaves of the woke and the fanatically green. Has doomsday per IPCC been averted, stalled, de-carbonized? Is the industry and prosperity of the world afloat on the breezes of hugely subsidized windmill farms and glassy roof panels? Are we off to the dreamland of “net-zero?” Not as long as Mr. Gates’s sleek and polished private jet has any say in the matter, or Mr. DiCaprio has any sway over the deck-cleaning staff of the multi-million-dollar yacht he chartered, which is a superlative floating man-cave.

Nay. When the oligarchs and the fanatics convene, every gathering is a poor repetition of the former, with the same pieties in ever less stirring language, the same posturing, the same weary, flaccid alarms, and the same “this is our last, last, last chance.”

But, there is one achievement: They have tamed half the Western world, the part of the globe that has climbed into energy security and the prosperity that only energy security and the wealth that it supplies enables. It is Western governments—those who have most benefited from oil and gas and coal, those who own health-care systems, the largesse of Western economies, the profusion of the ordinary grocery store, mobility by car or truck—which are the obliging, near obsequious patsies of the green shysters.

Yet all their security, their wealth, their comfort, and their ability to virtue-display—ban plastic forks from KFC—in these ridiculous gestures come from the very fuels dammed by the pharisees of the green monomania. The West plays the fool to its own hard-earned escape from the prisons of poverty, hard chance, and the imperatives of history.

However, the achievement of the green assault on these comforts and security is of a different order. They attacked the oil industry. They made a special campaign against “first world” oil. Has no pundit, newspaper, or government-funded broadcaster ever asked the question why green protest NEVER—without the caps I will repeat—never assaults, let us say, Saudi Arabia? Nigeria? Venezuela? China? India? And for the capstone of my rhetorical questioning, Russia?

The Russia of mini-Stalin, Mr. Putin. The “slaughter-man” (the coinage is Shakespeare’s) of Ukraine. The tyrant now shadowing the world with potential nuclear exchange. Destroyer of cities.

Where were the pipeline blockades in Russia? Where were the conference denunciations against Russia exporting its oil and gas to Europe? Even as Europe, listening like fools to the IPCC and COP vapourings, retreated to windmills and solar, cancelled their nuclear capacity, anathematized coal, and went shivering to the crazed ideal of “net-zero?” Coal use is rising by the way in the world’s largest nations. The greens always enable their targets.

Here then is the “achievement.” You greens and your COPs enabled Russia and Putin. You gave him a wand over Europe’s well-being and most vital resource. By your mad hostility to the source of Western strength and progress, you passed to a dictator a lever over their otherwise combined weight.

Green policies made Putin strong. Strong enough to face half the world, and trip it potentially into a conflict none wish to contemplate.

That’s the sum total of all the COP conferences.

By the way, you tamed Alberta. Your campaigns against the “tar sands” were perfectly successful. You landlocked the oil resources of a tranquil Canadian province and took it out of the game of threatening world peace. You neutered its industry, displaced its workers, and made it a pariah to be calumniated by the sages Leonardo DiCaprio and Neil Young.

Putin, you left unmolested. His pipelines were beneath your attention. You, this is a useful verb here, energized Putin’s ambitions, elevated Russia’s oil to a needful commodity, and placed half the future of Europe in the grip of an ageing tyrant. You gave economic power and the ability to invade, hurt, and kill to a reckless tyrant. Green does have its cost.

But as I have written, you did tame Alberta. And for that Montana, which as a border U.S. state is immensely grateful. Montana is secure. No Alberta tanks or jets will visit Montana.

To bring this to a point: Greenism has a dreadful cost. It strips relatively moral and civilized countries of the foundation on which their security and comfort rests. It amplifies power to those who resist its siren summons. It gratifies dictators and diminishes the civil reach of leaders and countries that believe in a world without war and its immense cruelties.

And it enables, it finances the operations and depredations of cruel and amoral leaders in some of the most vicious and cruel extensions of their power.

It would be nice to see an abject apology from the green movement for what they have partially made possible. But such a thought is the stuff of dreams.