Retired Secretary of the Navy: Shen Yun ‘For Your Heart’ 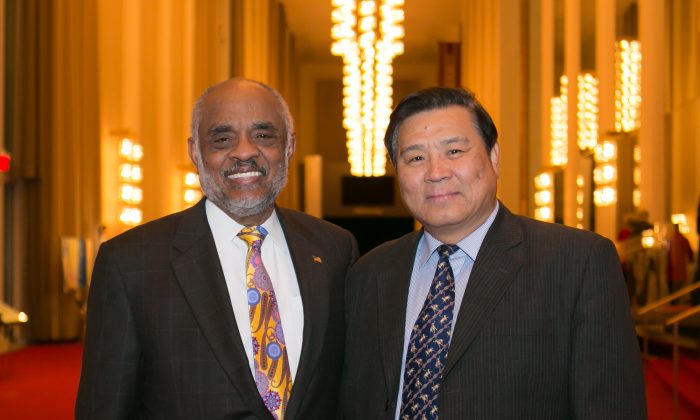 Mr. Penn called the entire performance by Shen Yun Performing Arts very, very positive, and “a good way for us to live our lives.

“Granted there are mean people out there in the world, but we cannot let them get us down. We have to do the right things,” he said. Mr. Penn saw the performance at the Kennedy Center Opera House on Feb. 17.

Through music and classical Chinese dance, Shen Yun aims to bring the heart of ancient China’s culture—a culture that valued principles such as mindfulness of others, truthfulness, and respect for gods—to the world.

“I am a spiritual person,” Mr. Penn said, and the pervasive spirituality of the performance resonated with him. Whether in the dances, in the songs, and even in “the people that are coming out of the sky and on to the stage, that was very spiritual.”

In many of the story-based dances, deities visit from the heavens via the digitally animated backdrop and then appear on stage as the dancers take over those roles.

The song that impressed Mr. Penn the most—those words to live by—came near the end of the two-hour performance and were sung by soprano Haolan Geng, in “The Moment of Salvation.”

The song mentioned that “we come to earth as a sojourn from Heaven,” but getting in our way of returning, we find, “The blind pursuit of progress” as well as lies that hide our true purpose.

He felt the lyrics, projected in both Chinese and English, were strong, yet subtle, and that viewers needed to pay attention to get the spiritual message within them.

He fears people may not be asking themselves that question anymore, but he feels it’s a vital question to ask. Shen Yun, he believes, showed that kind of thinking, where one sees the bigger picture and considers others before oneself.

Mr. Penn would hope that Shen Yun’s message would benefit the policymakers in Washington because the performance left him with three words: “Peace, hope, happiness.”

Even the last song was giving hope.
— B.J. Penn

“Even the last song was giving hope,” he said. “It shows that people could work together. And I think we have lost some of that skill in Washington. … It is no longer what we can do for the country, or what is best for—what is really best for my constituents,” Mr. Penn said.