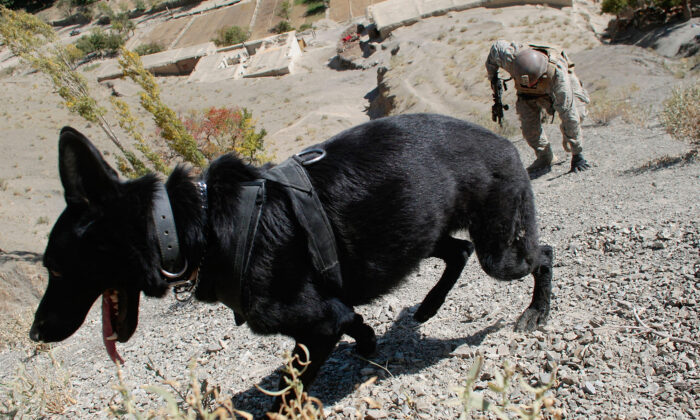 From the archives: This story was last updated in December 2019.

While the general public is slowly becoming more aware of the issue of supporting veterans returning from combat zones, there’s one demographic that’s hardly on the radar at all: military working dogs (MWDs).

These canines, once dedicated to defending their fellow soldiers, served on the front lines in conflict zones and are in need of fostering and adoption, according to a press release from Lackland Air Force Base in San Antonio, Texas. It is here at Lackland that many of them receive their training before being deployed.

The MWD program has two categories of dogs available for adoption: younger dogs that haven’t met the requirements of the training program and senior dogs (age 10–12) that have finished their service and need a good home to spend their golden years.

While the Armed Forces have generally had an easy time finding homes for the younger dogs, the older canine veterans are sometimes harder to place—just as is the case with senior dogs at civilian shelters. The Armed Services have a policy of first trying to place dogs with civilian law enforcement agencies or, failing that, with their former handlers.

This can be difficult logistically when a dog has been in service for many years and the handlers have since left the military themselves. Beyond that, members of the general public can register themselves. The dogs tend to be intelligent, strong, and faithful breeds like German shepherds, Belgian malinois, and Labradors, which play many different roles on the battlefield, including patrolling, detecting explosives, and searching for casualties.

As Chief Petty Officer Jason Silvis of Lackland Air Force Base explained to PawBuzz, “Every MWD, when they’re retiring, they do a behavioral test and an adoption test to make sure they’re not going to be food aggressive or bite a small child or chase the mailman down the street.”

Unfortunately, some of the canine veterans suffer from post-traumatic stress disorder, just like their human counterparts, and these require special handling at the base. “We do a wide variety of tests before we decide that the dogs are good to be adopted to the public,” Silvis said.

The military also requires that adoptive families meet certain criteria in order to make sure that these former-warrior dogs end up in the right environment. Families with children under 5 are not eligible, and adopters need to be prepared to pay the cost of veterinary treatment and adoption fees. Homes where the dogs end up need to have good fences with a height of 6 feet, according to the Military Times.

Jerry Britt, the 37th Training Wing MWD dispositions coordinator, who works at Lackland, testifies to the joy that these special dogs can bring to families wanting to honor their service and sacrifice. “You get the satisfaction of giving the retired military working dog a good place to spend the twilight years,” he said.

One of the people who has been through the adoption program twice, Professor Robert Klesges of the University of Virginia, gave a glowing testimony about his experience. Klesges said of his first adoptee, a German shepherd named Frida, “She was almost like a human with fur; she was that smart,” per the Military Times.

After being discharged for medical reasons in 2013, Frida brought joy to the Klesges home for five years until finally passing away. “She deserved to be treated like a queen,” he emphasized. As of the autumn of 2019, Klesges was preparing to be matched with a new senior MWD rescue.

Those interested in honoring these elderly dogs with the comfort they deserve can find more information at the Air Force’s 341st Training Squadron website.