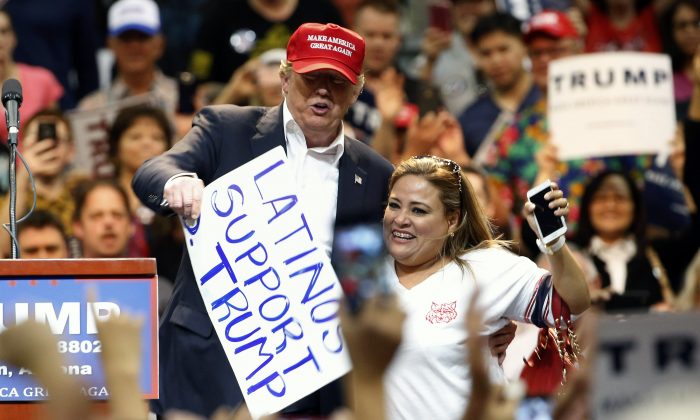 At a rally in Tucson, Arizona on March 19, 2016, Donald Trump pulled Betty Rivas onstage when he spotted her holding up the sign “Latinos Support Trump.”

“I love her, I fall in love—Melania, I’m fallin’ in love with her!” said the GOP frontrunner as he posed for a picture and held up her sign.

Betty Rivas, along with her husband Jorge, own the restaurant “Sammy’s Mexican Grill” a few miles outside Tucson.

Soon after the picture of Donald Trump with Betty Rivas was posted online, the restaurant began getting harassed, first on Yelp and Facebook, and then over the restaurant’s phone line.

“If I asked you to give me a list of 50 nasty words and phrases, you can pick all of them, they said them all,” Jorge Rivas told CNN.

The other consequence of Trump pulling her on stage was a boost in business, with the small diner getting triple the business that it normally gets.

They had to shut down the diner’s drive through window, and they temporarily ran out of food due to the influx of business.

Trump jumped on the story, with the frontrunner posting support for the restaurant on Facebook which was reposted on Twitter by one of Trump’s senior advisors, Dan Scavino: