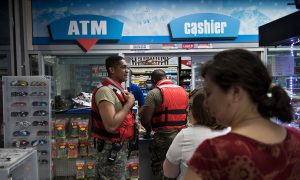 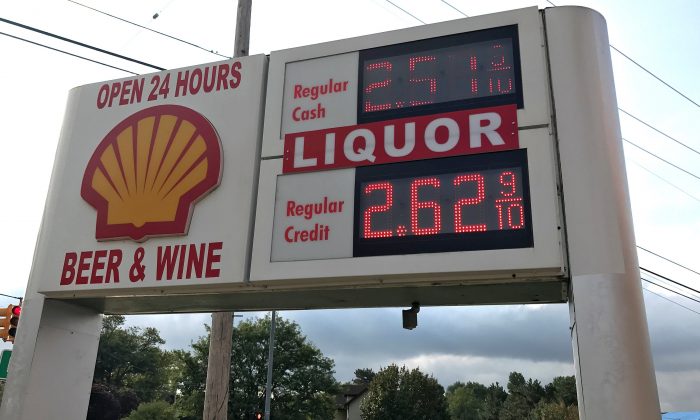 Gasoline Prices are seen at a service station in Michigan, U.S., August 31, 2017. (REUTERS/Joe White)
US

Major fuel pipelines feeding the U.S. Northeast and Midwest were either closed or severely curtailed, prompting shortages in some areas and dramatic spikes in wholesale prices.

The storm, which began as a hurricane a week ago, has roiled global fuel markets, and tankers carrying millions of barrels of fuel have been rerouted to the Americas to avert shortages. European refining margins hit a two-year high amid the surge in exports.

Indeed, the effects of the storm will continue for several weeks, if not months, after Harvey hammered the Gulf Coast for days and brought floods that buried Houston and the surrounding area in several feet of water. It knocked out about 4.4 million barrels of daily refining capacity, slightly more than Japan uses daily, and the signs of restarts were tentative.

The nation’s largest refiner, Motiva’s Port Arthur facility, which can handle 600,000 barrels of crude daily, will be shut for at least two weeks, according to sources familiar with plant operations.

Other plants in the Beaumont/Port Arthur area are expected to face similar challenges restarting as waters continued to rise, even as flooding receded in Houston, some 85 miles west.

In Corpus Christi, where Harvey first made landfall, refiners Citgo Petroleum Corp, Flint Hills Resources and Valero Energy Corp were moving to restart their plants, along with the nearby Valero Three Rivers refinery, according to sources.

Benchmark U.S. gasoline prices have surged more than 15 percent since the storm began, but in trading Friday, the contract for October delivery lost 1 percent, the first decline in five days. September’s contract had risen by 25 percent, but stopped trading Thursday.

U.S. crude prices continued to slump along with demand, with the futures contract falling 0.4 percent to $47.02 a barrel.

The national average for a regular gallon of gasoline rose to $2.519 as of Friday morning, according to motorists advocacy group AAA, with even gaudier increases in the U.S. Southeast, which relies heavily on Gulf supplies. South Carolina, for instance, has seen prices rise nearly 30 cents, and prices were up nearly 20 cents in Texas, where fuel shortages were already evident.

The U.S. government tapped its strategic oil reserves for the first time in five years on Thursday, releasing 1 million barrels of crude to a working refinery in Louisiana.

An adviser to President Donald Trump told a White House briefing more oil could be released from reserves.

“We would be very comfortable tapping into that,” homeland security adviser Tom Bossert told reporters.

Suppliers in the Chicago area were taking steps to prevent shortages, and banking on hope.

Dave Luchtman, owner and president of Lucky’s Energy Service Inc., a small distributor in Chicago, has rented two storage trailers that hold 8,000 gallons each, expected to be delivered Friday.

“So I have a little lifeline,” Luchtman said.

Refineries so far have not given any indication that there are fuel shortages, said Mario Orlandi, an operations manager at Olson Service Co, which supplies diesel and gasoline to the Chicago area.

The global impact of the storm was being felt in Venezuela, where financially strapped state-run PDVSA is facing the possibility that scheduled deliveries – tankers floating offshore for weeks due to non-payment – will make their way to other Latin American destinations.

At least two cargoes scheduled to deliver to Venezuela currently in the port of Curacao are now expected to be delivered to Ecuador.

Mexico, Brazil, Colombia and other countries want to tap some of the 7 million barrels of fuel sitting in the Caribbean sea, according to three traders and shippers.

European and Asian traders have diverted millions of barrels of fuel to the Americas. That included a rare opportunity for exports of jet fuel from Europe to the United States, reversing the usual flow of shipments.

Supplies from distant markets may not arrive soon enough to avert a crunch after the Colonial Pipeline, the biggest U.S. fuel system, said it would shut part of its main lines to the Northeast.

“We are going to have outages from Texas to Boston,” said one East Coast market source. The market is “way under-appreciating the magnitude of this.”

Several East Coast refineries have run out of gasoline for immediate delivery as they sent fuel elsewhere, and concerns over shortages ahead of the U.S. Labor Day extended weekend were mounting.