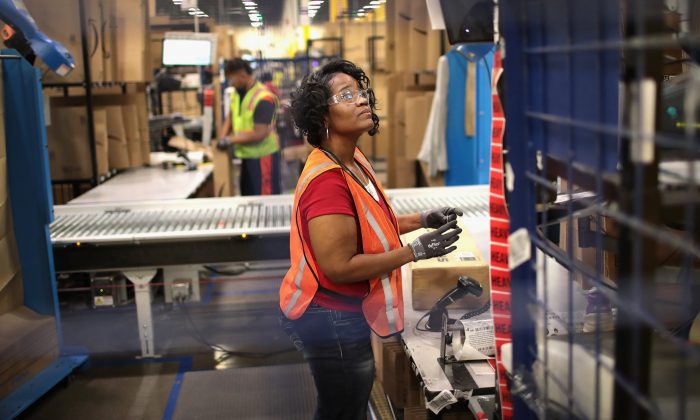 Americans have been increasingly generous on retail spending and have frequented restaurants more often over the past five months, Census Bureau data show.

Americans spent nearly $507 billion on retail and food services in June—up half a percent since May and nearly 3 percent since January.

With a minor hiccup in January, consumer spending has been on a roll for a year now, up 6.6 percent from June last year.

“The consumer continues to forge ahead,” Ryan Sweet, head of monetary-policy research at Moody’s Analytics, told Bloomberg. “We expect a solid second half for consumer spending.”

The spending growth is partly pushed along by Americans forking out more at gas stations, due to rising gas prices, up nearly 22 percent from a year ago.

But retailers in nearly all categories have seen improvements since a year ago, most notably nonstore retailers, including online sellers (up over 10 percent). Car dealers and furniture stores saw a nearly 5 percent increase, while building material sales went up by more than 6 percent.

Americans also spent 8 percent more in bars and restaurants and almost 7 percent more in health and personal care retail. The only retailers seeing a decline are bookstores, musical instrument stores, and sporting and hobby goods sellers, which are down almost 5 percent.

President Donald Trump ran for election with a promise of reviving the economy, and the positive results look to boost his agenda for the Nov. 6 midterm elections.

“The economy is doing perhaps better than ever before, and that’s prior to fixing some of the worst and most unfair Trade Deals ever made by any country,” Trump said in a July 3 tweet.

The majority of Americans approve of his handling of the economy and job creation, while black and Hispanic unemployment has dropped to historic lows.

Some 2 in 3 Americans say it’s now a good time to find a quality job. Gallup has never before seen such a positive response in the 17 years it has been asking the question.