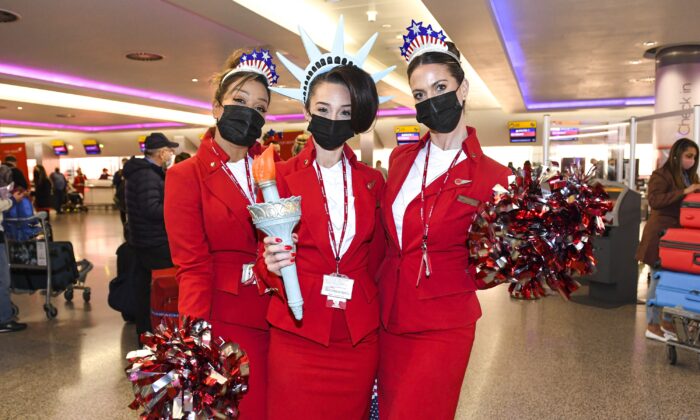 Virgin Atlantic cabin crew staff pose for photos ahead of the departure of Virgin Atlantic flight VS3, at Terminal 3 of London Heathrow Airport, on Nov. 8, 2021. (PA)
UK

A British minister hailed the resumption of UK–U.S. flights as a “momentous” move and a “massive moment” for the aviation sector, after the United States lifted its COVID-19 travel ban and reopened its borders to UK visitors on Monday.

Thousands of British travelers are jetting off to the United States for long-awaited reunions with family and friends as the travel ban was lifted 600 days after it was imposed.

“This is a massive moment for the aviation sector,” he said at Heathrow Airport.

“It’s about people fundamentally, it’s about getting families back together,” Courts said. “That’s on top of the massive economic benefit that there is from having the United States and Great Britain—these great friends and allies, countries that have so much in common—back in regular contact with each other again.”

Transport Secretary Grant Shapps earlier called it a “significant moment” as transatlantic travel has “long been at the heart of UK aviation.”

In early 2020, the Trump administration announced that the United States would restrict flights from China, much of Europe, the UK, Brazil, and other countries in the nascent phase of the COVID-19 pandemic, which was caused by the CCP (Chinese Communist Party) virus.

In January 2021, Trump issued an order to lift restrictions on travellers from Europe, but the order was reversed by President Joe Biden before it took effect.

The Biden administration announced on Sept. 20 that it would ease the travel restrictions for fully-vaccinated foreign passengers.

In addition to being fully vaccinated, foreign travellers arriving in the United States by air must also provide proof of either a negative COVID-19 test taken no more than three days before travel, or that they have recovered from the virus in the previous three months.

Airlines have ramped up UK–U.S. flight schedules to meet the increased demand for travel. A total of 3,688 flights are scheduled to operate between the countries this month, according to travel data firm Cirium.

That is up 21 percent compared with October, but remains 49 percent down on the pre-pandemic levels of November 2019.

Around 3.8 million British nationals visited the United States every year prior to the pandemic, according to the UK’s Foreign, Commonwealth and Development Office.

British Airways CEO Sean Doyle said the reopening of the U.S. borders was a “moment to celebrate” after more than 600 days of separation.

Virgin Atlantic chief Shai Weiss called it “a day of celebration for all of us” in the aviation industry. He called the transatlantic route “one of the most important in the world.”