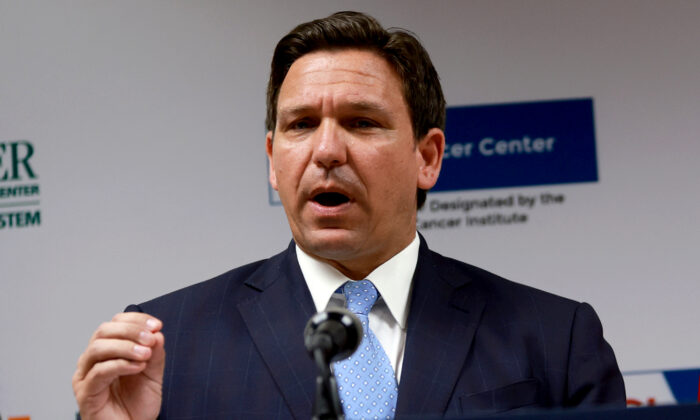 Florida Gov. Ron DeSantis speaks during a press conference at the University of Miami Health System Don Soffer Clinical Research Center in Miami on May 17, 2022. (Joe Raedle/Getty Images)
US

Restaurant Says Drag Shows Will Go On Despite Opposition From Governor

PUNTA GORDA, Fla.—A Miami restaurant is in the sights of Gov. Ron DeSantis for holding drag queen shows where children were part of the audience—and the show—but its owners are pushing back against a complaint filed by the state where investigators called the venue a “nuisance.”

They say the controversial drag show will go on in spite of Gov. Ron DeSantis’ criticism.

At the urging of the governor, the Florida Department of Business and Professional Regulation (DBPR) is targeting the liquor license of the R House, which stands accused of exposing children to “sexually explicit” drag queen shows after an investigation conducted by the state.

A spokesman for the restaurant told reporters, “It’s business as usual at R House.”

“As of right now we are set to continue this weekend,” said Larry Carrino, a restaurant spokesman on July 28. “There are no plans to alter operation while the client and their attorney are working with the state to remedy the situation.”

Owen Bale, co-owner of R House, said there has been “overflowing” support since the dispute unfolded.

“We had a lovely, positive vibe in the restaurant last night [July 27] and look forward to serving our guests tonight and in the days and nights to come,” Bale said in a released statement on July 28.

“R House is and always will be an all-inclusive environment and we thank our fans, friends, and the entire community for the positive, heartfelt support we’ve received in the wake of the complaint.”

The controversy began on July 26, when DBPR filed a complaint asking for a final order on the R House, after videos surfaced online of a drag queen show where children were either paraded around with drag queens dressed in pasties and T-backed bikini bottoms adorned with dollar bills or were attending in the audience.

The state is targeting the restaurant’s liquor license and the governor said at a July 27 press conference in Tampa that he wants to “shut it down” because “children didn’t need to have some agenda shoved down their throats all the time.”

“The nature of the performances … particularly when conducted in the presence of young children, corrupts the public morals and outrages the sense of public decency,” the complaint read in an argument that accused the R House of “disorderly conduct.”

The R House in Miami on its Facebook page touts “the proud home of South Florida’s most popular weekend drag brunches! Make some time to check us out and experience R House.”

The restaurant advertises a brunch menu featuring $30 kids meals and adults at $55. The brunches are by reservation—booked weeks in advance—and there is no age requirement listed.

It was noted in the complaint that the restaurant has been hosting brunch drag shows since 2017.

The R House released a written statement in response to the formal complaint by DBPR: “We are aware of the complaint and are currently working with the Department of Business and Professional Regulation through our attorney, to rectify the situation.

“We are hopeful that Gov. DeSantis, a vociferous supporter and champion of Florida’s hospitality industry and small businesses, will see this as what it is, a misunderstanding, and that the matter will be resolved positively and promptly.”

However, DeSantis said there was no mistaking what investigators found during a visit to the Miami restaurant as an exhibit was included with the complaint that he said showed “a nearly nude dancer parading a young girl through the audience,” in Miami.

The complaint called the R House a “nuisance” and said the Florida Supreme Court has “recognized that ‘men impersonating women in the context of suggestive and indecent performances constitutes a public nuisance.”

The restaurant has 21 days in which to respond to the complaint.

The investigation revealed that investigators visited the restaurant on three separate occasions, July 9, July 17, and July 23 and took video of the brunch where investigators saw a little girl that appeared to be between 3 to 5 years of age with a “dollar bill in her hand” was being “led” by a “transgender dancer.”

The complaint said the apparel of the dancers was described as “sexually suggestive and sometimes sexually explicit—consistent with what one would observe at an adult-themed nightclub.”

Investigators also included as part of their complaint social media screenshots of similar videos and compared it to a “strip club performance with children being welcome to attend.”

Gainesville attorney Jeff Childers, who specializes in corporate law, told The Epoch Times the state has a “solid case.”

But he did point out that this is not a criminal case, but a civil one because the role of the DBPR is to “regulate alcohol permits” and when complaints are filed to “investigate them.”

However, Childers pointed out that the defense will more than likely question the timing and speed that this case is being handled and may cite that it may be “politically motivated” because “the government never moves that fast.”

“Assuming there was a citizen complaint, which seems likely … [the state] is on solid ground to have commenced the investigation,” he told The Epoch Times.

Childers said he expects this to move along to the Florida Supreme Court, which he described as the “most conservative court in the country.”

“Given the temperature of the state right now, I would be surprised if the court did not weigh in on it.”

He said that the state “very smartly” took on the issue of the bar’s ability to hold a drag show, and the involvement of children would be problematic for R House.

If the restaurant were Childers’ client, he said he would recommend they “settle” with DBPR.

“I would suggest that they offer to ban children from all future performances,” he said in a hypothetical sense. “Just shut it down voluntarily and keep their liquor license.”

Then Childers said the DBPR can pass it to the state legislature that will be convening in work sessions this fall for the new laws in the spring.

When asked about the state’s child welfare laws—when exposing children to drag shows and allowing their participation in them—he pointed to the Florida Department of Children and Family Child Maltreatment Index which he said was “very specific.”

“I’m not sure that anybody has an appetite for prosecuting parents for making the decision to take their child to a drag show,” he said.

“There might be a compelling case against the parents under a child endangerment theory or contributing to the delinquency of a minor.”

Without specific case law in front of him, he could not elaborate further but said that there should be a “solution that doesn’t involve creating a new law” that could “backfire” on the governor’s parental rights law.

“Some Republicans in state government are very concerned with these new laws that they’re making that they could be at some point be turned around,” he said.

However, the governor is firm in his beliefs about protecting Florida’s children.

“We want to make sure that we have a state, and we have communities where kids can be kids.”

The governor, who is the father of three young children, said that he is “sensitive to this.”