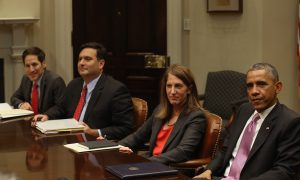 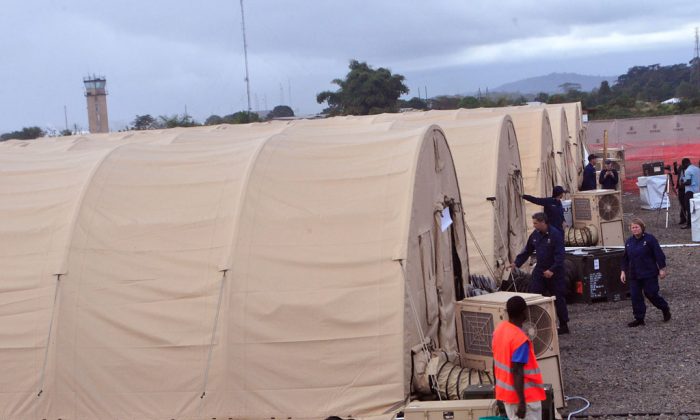 Health workers walk around medical tents that form part of a new American clinic to be used for the treatment of people suffering from the Ebola virus in the outskirts of the city of Monrovia, Liberia, on Nov. 5, 2014. As the Ebola epidemic flares in new hot spots and dims in others, the response to its shifts must catch up, experts say, and that’s a challenge because it is a slow process for governments to authorize aid, to gather it together and then deliver it. And to build treatment units, even rudimentary ones, takes even more time. By the time it’s built, the outbreak may have moved elsewhere. (AP Photo/Abbas Dulleh)
Ebola

DAKAR, Senegal—Many beds are empty at newly opened Ebola treatment units in Liberia’s urban centers because the outbreak is now flaring in more rural parts of the country. In Sierra Leone’s capital, there aren’t enough treatment units as the epidemic spreads there.

Those helping battle the world’s worst Ebola outbreak must be more agile to catch up as the dreaded disease jumps from one place to another, experts say. That’s a challenge because it is a slow process for governments to authorize aid, to gather it together and then deliver it. And to build treatment units, even rudimentary ones, takes even more time. By the time they’re built, the outbreak may have moved elsewhere.

In Liberia, the U.S. this week opened an Ebola treatment unit in Tubmanburg, about 40 miles (64 kilometers) north of the capital, Monrovia. A 250-bed Doctors Without Borders clinic in Monrovia is treating only about 50 patients. There have been no patients at another facility in Foya, in northern Liberia, since Oct. 30. The U.S. plans to build 17 units in all, and it has already opened a field hospital to treat infected health workers.

The head of the U.N. mission fighting Ebola in West Africa called on Thursday for a more flexible and nimble response that puts treatment units in remote regions and gets staff rapidly to new outbreaks.

Anthony Banbury warned the U.N. General Assembly that Ebola is an elusive disease that has just reappeared in Mali where it was thought to be under control, demonstrating the threat that the virus still poses to the region. He said the international community is having enough challenges trying to mobilize resources to respond to the crisis in hardest-hit Liberia, Sierra Leone and Mali and any outbreaks in other countries would be “truly devastating.”

“Ebola is a fearsome enemy and we will not win by chasing it,” Banbury said. “We must get ahead of it.”

Liberian President Ellen Johnson Sirleaf said Thursday she is lifting a state of emergency imposed to control the outbreak but added that the move does not mean it is over. In fact, a day earlier she visited a new Ebola hot spot in the coastal county of Grand Cape Mount on the border with Sierra Leone.

The outbreak, which has killed more than 5,000 people and infected more than 14,000 in West Africa, is currently hitting Sierra Leone particularly hard.

Britain is training health workers and running units in Sierra Leone. Funds are coming in, though not enough, Oxfam said.

Doctors Without Borders says the outbreak needs “rapid response teams” that can bring care to remote villages, rather than trying to get sick people out. Such teams would include medics, disinfection specialists and psychologists or social workers and could stamp out a budding outbreak in a village before it can spread.

Fasil Tezera, head of operations for Doctors Without Borders in Liberia, said such mobile teams were frequently deployed in previous Ebola outbreaks, which typically happened in remote areas. They may need to be dispatched by boat or helicopter to reach villages that can’t be accessed by road.

“We’re seeing a lot of resources coming in, but in many ways they’re following the pattern of the outbreak from two months ago,” said Kris Torgeson, a liaison officer in Liberia for the group, which has led the Ebola fight. She was referring to the time when the outbreak in Liberia was mainly hitting the capital.

“International aid response must rapidly adapt to this new phase of the epidemic, or risk undermining progress made against Ebola,” Doctors Without Borders said.

In Washington, Rajiv Shah, administrator of the U.S. Agency for International Development, called on the House Foreign Affairs Committee to approve the Obama administration’s request for $6.2 billion in emergency aid to fight Ebola in West Africa and shore up U.S. preparedness.

From The Associated Press. Jonathan Paye-Layleh in Robertsport, Liberia, Edith M. Lederer at the United Nations and Lauran Neergaard in Washington contributed to this report.