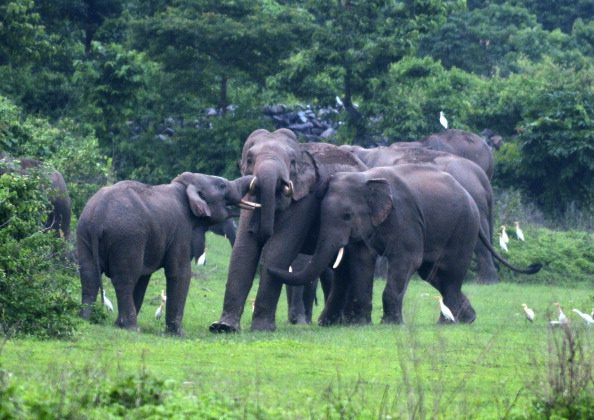 A herd of wild elephants are pictured as they stray close to Kolabari village in Naxalbari, some 50 kms from Siliguri, on June 14, 2014. (Diptendu Dutta/AFP/Getty Images)
News

Elephant and human conflict in India does not seem to come to an end. In fact, with regular reports of elephants raiding crop fields, entering cities and being accidently hit by trains, the clash between the jumbos and humans seems to be only escalating. There is though a solution, a way to maintain peace without disregarding the needs of both humans and elephants. And a small town in India has stepped up to the challenge by resolving the man-elephant conflict in a most unique way. Using everyday technology to evade dangerous encounters, see the video that captures the story of conservation innovation in Valparai, Tamil Nadu.

Elephants in India live in a variety of habitats and landscapes. These can be large forest areas, grasslands, mountains, valleys, and areas near rivers and streams. Elephants are also known to move about a lot and may roam 4-6 km in a day. This requires a vast home range sometimes over 600 square kilometers. But Indian landscape is not what it used to be a 50 or 100 years ago. With growing population much of elephant habitat has been converted into agricultural fields or tea-coffee estates. Forests are now fragmented giving elephants no choice but to enter fields, estates, towns and villages to cross over from one part of the forest to another. The conflict therefore like the farms, buildings and highways cutting forest paths, is man-made too.

In such circumstances it is natural for some to get angry at the way animal needs are constantly neglected when it comes to fulfilling human needs. The counter argument is also valid – how will local human population survive if not for their use of the land’s resources? But instead of mere words and accusations, one social initiative in India has shown to the world that harmony between humans and elephants is possible if the core issue is understood and the entire community is actively involved.

See this must-watch story of conservation innovation that is inspiring and a model that can be easily replicated in other areas where similar tensions arise between humans and animals.

This was originally written and published by Atula Gupta, the head administrator for indiasendangered.com. For more information and the original article, please click HERE.