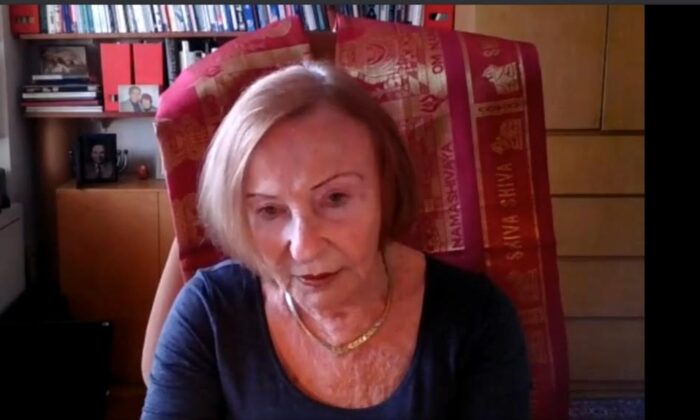 Vera Sharav was only 3 years old when her world collapsed.

She and her family were chased out of Romania and herded into a concentration camp in Ukraine during World War II, where they were left to wait, and starve.

“The cloud of death was always there,” Sharav told The Epoch Times.

Weekly, a list determined who would be sent where; whether it be a death or slave labor camp, she said.

While at the camp, she said her father died of typhus when she was 5, which had been widespread throughout the camps because of the cold and malnutrition.

After three years at the camp, she was rescued in 1944, she said.

“My mother got wind that a few orphans would be transported out of the camp, so she lied and said I was an orphan to save my life, and that’s how I wound up leaving,” Sharav said.

This began what she called her odyssey as a child without parents, left to her own intuition and keen critical assessment of others’ intentions.

“I had to assess who I could trust to take care of me,” she said.

While on a train to the Port of Constanta, Romania, where there were three boats awaiting to take groups of people to Palestine, she befriended a family. However, upon arrival, she found herself assigned a boat with other orphan children that would separate her from the family with whom she felt she could trust. So she rebelled.

“No matter what, I could not be convinced to get on that boat,” she said. “Miraculously, in the end, they gave in to me.”

Seasick, she fell asleep that night, only to wake up to find that the boat with the orphans had been torpedoed by who she said she found out decades later to have been the Russians.

Though she carried guilt for having survived, she was grateful she resisted because that resistance kept her alive, she said.

“I do not obey authority, and it saved my life.”

These memories returned in 2020 during the web of COVID-19 restrictions that spun out of control with the help of media propaganda, she said.

“So now, when people are obeying authority mindlessly, giving up their rights to make decisions about their own lives and what goes into their own bodies, I think back to that time,” she said.

Today, Sharav is a medical activist and founder of the Alliance for Human Research Protection, a network of lay people and professionals who work to uphold humanitarian values and ethical standards established in the Hippocratic Oath, the Nuremberg Code, and the Universal Declaration on Bioethics and Human Rights.

Most recently, she’s joined with Scott Schara, co-founder of Our Amazing Grace’s Light Shines On, Inc.

Both Sharav and Schara discussed with The Epoch Times what they saw as parallels between the National Socialist regime in Germany and the current medical directives being carried out in the United States through government funding.

Since the death of his 19-year-old daughter Grace in a hospital in 2021, after having been injected with a combination of drugs that he found out later was part of a federal hospital protocol, Schara called what was happening “genocide.” He has been crusading to tell his daughter’s story and network with others who have had a similar experience while bringing attention to the protocols that he believes amounted to the murder of his daughter, who had Down syndrome.

Under the Nazi regime, Sharav said, medicine was weaponized, as it has been today.

Though the Jews were the primary target, she said, the first medically murdered victims were disabled German infants and children under the age of 3.

This later expanded the operation—titled T4 for the street address of the program’s central office in Berlin—to the disabled of all ages, including the mentally ill and senior citizens, Sharav said.

“The Nazis called them worthless eaters,” she said. “T4 was a concerted effort to be rid of what their propaganda called the ‘economic burden.’”

Schara pointed to a 2021 Medicare Trustee’s Report, which evaluates the cost of keeping the elderly and disabled federally funded.

“Thirty-nine percent of that federal budget goes to those two groups right now, which is $2.2 trillion a year,” Schara said.

On page 11 of the report (pdf), there is a call for “substantial changes” to address financial challenges.

“The sooner solutions are enacted, the more flexible and gradual they can be,” the report states.

For Schara, the implication, while not overtly stated, suggests a call for eugenics that was supported by academic elites early in U.S. history, and later adopted by Nazi Germany.

Ten years after he took power, Adolph Hitler launched his genocide program that had been introduced in incremental steps with the help of propaganda portraying the regime as heroes, Sharav said.

“What happened to Grace, and what happened to many disabled and elderly in Western Europe, Australia, Canada, and the United States in March and April of 2020 was medical murder,” Sharav said.

Genocide isn’t new to the United States, Sharav said, as it was Associate Justice of the U.S. Supreme Court Oliver Wendell Holmes who voted in favor of the 8-1 majority opinion in the 1921 case Buck v. Bell, which upheld the Virginia Sterilization Act of 1924 and the forced sterilization of Carrie Buck, who was alleged to be mentally defective.

Holmes said it would be better to prevent the mentally disabled from being born than to allow them to “sap the strength of the state” or “let them starve for their imbecility.”

“The principle that sustains compulsory vaccinations is broad enough to cover cutting Fallopian tubes,” the justice wrote in his opinion. “Three generations of imbeciles are enough.”

“Arguments for eugenics are always built on a lie,” Sharav said. “But it’s an ideology that continues to poison public health policies.” And he blames this type of thinking for the medical decisions that ultimately contributed to Grace’s death.

‘The Banality of Evil’

As he continues to try to wrap his mind around what happened to his daughter, Schara says he gained some insight from the writings of Holocaust survivor Hannah Arendt and her concept of the “banality of evil.”

“It opened up a whole different view of the world for me,” Schara said.

Sharav’s experience made her familiar with the concept. The banality of evil is the normalization of mass murder by making it a bureaucratic routine that is handed down as orders through the chain of command to the person who pulls the switch, gives the injection, or turns on the gas, she said.

“No one called it murder,” Sharav said. “The Nazis were very adept at propaganda and language. The Jews were called ‘spreaders of disease,’ not unlike the epithets thrown at those who didn’t take the jab.”

Throughout 2021, the spread of COVID-19 was blamed on “the pandemic of the unvaccinated,” a phrase that was used by President Joe Biden and governors such as North Carolina Gov. Roy Cooper.

“The whole language of it is dehumanizing,” Sharav said.

Schara applies the concept to the fact that 67 percent of Down syndrome children are aborted in the United States, he said.

“Doctors encourage the mother to get an amnio (amniocentesis) test, and if the test shows Down syndrome or another disability that would complicate the parent’s life, he encourages an abortion,” Schara said.

What Sharav said she’s seen in an unholy union when medicine gets into bed with the government.

“The Hippocratic Oath goes out the window,” she said.

The pledge to “do no harm” got replaced with allegiance to “the greater good,” Sharav said.

The question then remains, who has the authority to decide what’s best for the greater good, Sharav challenged.

What supports the greater good is having respect for the individual, Sharav said, and to pursue policies that advocate for the many over the individual is to open the door to medical practices that will cause harm.

“Look at what Big Pharma is doing now to children, aggressively pursuing them to be jabbed when they aren’t at risk at all from COVID-19,” she said.

It’s a slippery slope that—with the help of advanced technology—society is sliding down rapidly compared to the snail’s pace that it took for Hitler to implement his “Final Solution,” Schara said.

“We’re headed there exceptionally fast,” Schara said. “Today, the ‘Final Solution’ is the reduction of the entire human population under the ‘Sustainable Agenda’ of Agenda 2030.”

Unlike the physical camps that required ink tattoos for identification and guards to manage the prisoners, the new prisons are digital, Sharav said, managed remotely by surveillance through smartphones and cities.

“With smart technology, you can manage billions all at once,” she said. “It’s chilling.”

It’s hard for many to fathom that an elite few would conspire to cause widespread harm, Sharav said.

“People will say, ‘They made a mistake; it was an accident.’ But no, the elite, just like the Nazis, have this arrogance in which they believe they are superior and therefore entitled to rule the rest of us because they think we are inferior,” Sharav said.

Schara said his concern is with an elite ruling class that is godless, believing only in what is measurable and controllable.

He emphasizes his faith in God as a powerful weapon to combat the dark agendas that have escalated beyond the comprehension of the average person, working 60 hours a week just to make ends meet.

“We should not fall trap to the false light that Satan will eventually ride in on to steal more souls. God’s true light protects those who believe,” he said.

“We the People” can reclaim sovereignty by learning to trust in intuition, experience, and the ability to assess lies from truth, Sharav said.

“Stop watching mainstream media,” Sharav said. “They’re all reading from the same script. They have bombarded people with fearmongering, which is exactly the same thing that the Nazis did. That’s how they controlled the population: through fear.”

For Sharav, the mission that has been laid at the feet of people throughout the world is the same as it was for her as a child: “Resist. Wake up. Stop obeying.”