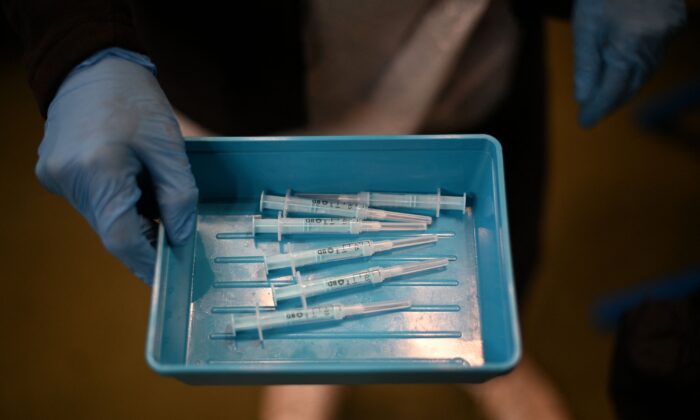 Syringes with Moderna's COVID-19 vaccine sit on a tray in a vaccination center in London on Dec. 4, 2021. (Daniel Leal/AFP via Getty Images)
By Petr Svab

Jessica Rose didn’t ask for any of this. She started to analyze data on adverse reactions after COVID-19 vaccines simply as an exercise to master a new piece of software. But she couldn’t ignore what she saw and decided to publish the results of her analysis. The next thing she knew, she was in a “bizzarro world,” she told The Epoch Times.

A paper she co-authored based on her analysis was withdrawn by Elsevier, the company publishing the academic journal that ran the article, under circumstances that raised eyebrows among her colleagues. The publisher declined to comment on the matter.

Rose received her PhD in computational biology from the Bar-Ilan University in Israel. After finishing her post-doctoral studies on molecular dynamics of certain proteins, she was looking for a new challenge. Switching to a new statistical computing software, she was looking for an interesting data set to sharpen her skills on. She picked the Vaccine Adverse Event Reporting System (VAERS), a database of reports of health problems that have occurred after a vaccination and may or may not have been caused by it.

She said she wasn’t looking for anything in particular in the data.

“I don’t go in with questions,” she said.

What she found, however, was disturbing to her.

VAERS has been in place since 1990 to provide an early warning signal that there might be a problem with a vaccine. Anybody can submit the reports, which are then checked for duplicates. They are largely filed by health care personnel, based on previous research. Usually, there would be around 40,000 reports a year, including several hundred deaths.

But with the introduction of the COVID-19 vaccines, VAERS reports went through the roof. By Jan. 7, there were over a million reports, including more than 21,000 deaths. Other notable issues include over 11,000 heart attacks, nearly 13,000 cases of Bell’s palsy, and over 25,000 cases of myocarditis or pericarditis.

Rose found the data alarming, only to realize authorities and even some experts were generally dismissing it.

“Clearly, there’s no concern [among these authorities and experts] for people who are suffering adverse events,” she said.

The usual arguments against the VAERS data have been that it’s unverified and unreliable.

Rose, however, sees such arguments as irrelevant—VAERS was never meant to provide definitive answers, it’s meant to give early warning and, as she sees it, it’s doing just that.

“It’s emitting so many safety signals and they’re being ignored,” she said.

She teamed up with Peter McCullough, an internist, cardiologist, and epidemiologist, to write a paper on VAERS reports of myocarditis in youth—an issue already acknowledged as a side effect of the vaccination, though usually described as rare.

As of July 9, they found 559 VAERS reports of myocarditis, 97 among children ages 12–15. Some of them may have been related to COVID itself, which can also cause heart problems, but there were too many cases to dismiss the likelihood the vaccines were involved, according to the authors.

“Within 8 weeks of the public offering of COVID-19 products to the 12–15-year-old age group, we found 19 times the expected number of myocarditis cases in the vaccination volunteers over background myocarditis rates for this age group,” the paper said.

After two weeks, on Oct. 15, the paper disappeared from the publisher’s website, replaced by a notice of “Temporary Removal.” Not only weren’t the authors told why, they weren’t informed at all, according to Rose.

“It’s unprecedented in the eyes of all of my colleagues,” she said.

When they brought up the issue with the publisher, they were first told the paper was pulled because it wasn’t “invited,” Rose said. That was shot down as irrelevant by McCullough, who threatened to sue for breach of contract. The publisher then turned to its terms of use, saying it has the right to refuse any paper for any reason.

It’s still not clear why the paper was pulled.

“I do apologise, but Elsevier cannot comment on this enquiry,” said Jonathan Davis, the publisher’s communications officer, in an email to The Epoch Times.

In late November, the paper was replaced by a notice that the “article has been withdrawn at the request of the author(s) and/or editor.”

The paper’s conclusions are not necessarily controversial. A recent Danish study concluded, for example, an elevated risk of myocarditis for young people following the Moderna COVID vaccine.

It’s common, however, even for papers that examine potential issues with the vaccines to frame their results in a way that still endorses vaccination.

“That’s what you have to say to get your work published these days,” Rose said.

Her paper did no such thing.

“As part of any risk/benefit analysis which must be completed in the context of experimental products, the points herein must be considered before a decision can be made pertaining to agreeing to 2-dose injections of these experimental COVID-19 products, especially into children and by no means, should parental consent be waived under any circumstances to avoid children volunteering for injections with products that do not have proven safety or efficacy,” the paper said.

The paper also called the vaccines “injectable biological products”—a reference to the fact that they are distinct from all other traditional vaccines.

A traditional vaccine uses “whole live or attenuated pathogens” while the COVID vaccines use “mRNA in lipid nanoparticles,” Rose explained via email. She said the lipid nanoparticles include “cationic lipids which are highly toxic.” Pfizer, the manufacturer of the most popular COVID-19 vaccine in many countries, addressed the issue by saying the dose is sufficiently low to ensure “an acceptable safety margin,” according to the European drug authority, the Committee for Medicinal Products for Human Use (pdf).

Rose also noted that the COVID-19 vaccines haven’t gone “through the 10-15 years of safety testing that vaccines have always had to go through … for obvious reasons.”

By this point, Rose is no longer a dispassionate observer. Reading through countless VAERS reports gave her a window into the hardships of those who believe they’ve been harmed by the vaccines.

“I speak for all of those people,” she said.

In the past, 50 reports of deaths in VAERS would prompt authorities to hit the brakes and investigate, Rose said. In her view, that should have happened with the COVID-19 vaccines a year ago.

Not only has that not happened, but it isn’t even clear what would be enough to convince the authorities to do so.

“What’s the cut-off number for the number of deaths?” Rose asked.

The counterargument is that the vaccines save more lives than they cost. But in Rose’s view, this logic is flawed since the vaccines haven’t been around long enough and studied thoroughly enough to tell how many lives they may cost.

It is known, however, that VAERS understates adverse events following vaccination—by a factor of anywhere between 5 and as much as 100, based on some estimates.

Submitting a VAERS report takes about 30 minutes and many medical practitioners simply don’t have the time, Rose said. Some may feel that filing the report may get them labeled as “anti-vaxxers.” Some may simply not associate whatever health issue they’re facing with the vaccination. Some may not even be aware VAERS exists.

It’s unlikely that any significant number of the reports would be fraudulent, she suggested, noting it’s a federal offense to submit a false report.

Rose has now joined the ranks of dissident doctors and researchers skeptical of the official line on the vaccines and the pandemic in general. She described it as something she’s compelled to do despite the disincentives involved.

“We don’t want to be doing this. But it is our duty. Doctors swore an oath to do no harm. And researchers with integrity cannot look away from this,” she said via email.

Correction: A previous version of this article incorrectly identified Elsevier as an academic journal. Elsevier is a company specializing in publishing scientific literature. The Epoch Times regrets the error.