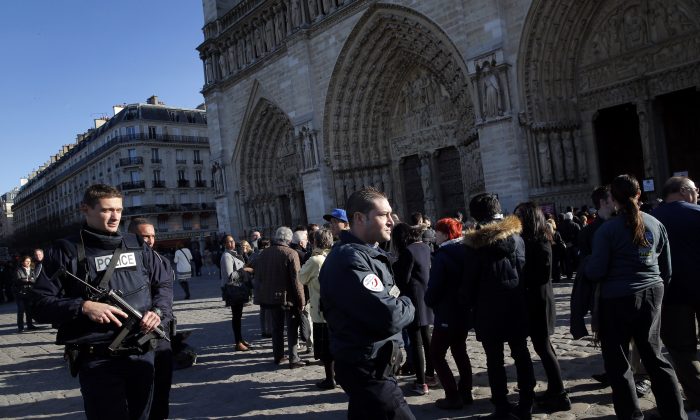 Authorities cleared the Republique plaza, or the Place de la République is a square in Paris, after unconfirmed reports of “gunshots,” where mourners were gathering for the dead in the terrorist attacks that left at least 128 dead in Paris. (AP Photo/Christophe Ena)
Europe

Authorities cleared the Republique plaza, or the Place de la République, Paris, after unconfirmed reports of “gunshots,” however, the shooting was a false alarm. Police confirmed the update with AP. Police also cleared the plaza without an explanation, but reports circulated on social media said that there were “shots” heard. Mourners were gathering for those killed in the terrorist attacks that left at least 128 dead in Paris on Friday night.

This is the moment crowds start running from Place de la Republique as Matt Frei broadcasts live from Paris after a false alarm that someone had been shot.

Authorities clear Paris’ Republique plaza, which was filled with mourners, no reason given – @AP https://t.co/ePCrK4d9FP

Police were seen with their guns drawn, reported Reuters. Hundreds of people were seen leaving the gathering.

A live video feed, posted by Reuters, show people running from the plaza. However, reporters on the scene said the situation is now calm, as of 12:58 p.m. ET, or 6:58 p.m. French time.

Police did not give a reason for the clearing.

BREAKING: Panic breaks out at scene of one of the Paris attacks, where police enter with drawn guns.

There were reports of yells and screams in the crowd and a stampede to get out of the gathering.

The army was seen on the streets of Paris. A police operation closed to Rue Coquillere and Rue de Louvre as well, according to reports.

Army on the streets … Police operation appears to be underway close to Rue Coquillere and Rue de Louvre. #ParisAttacks @CBCNews

Meanwhile French police have issued an alert for Salah Abdeslam, and a manhunt is currently underway for him. It warns people who see him that he’s dangerous, urging locals   to “not intervene yourself.” Abdeslam is 26 years old and is 5″9, or 175 cm.

His brother, Ibrahim Abdeslam, was definitively identified as being two of the terrorists, a senior European intelligence official told the Washington Post.