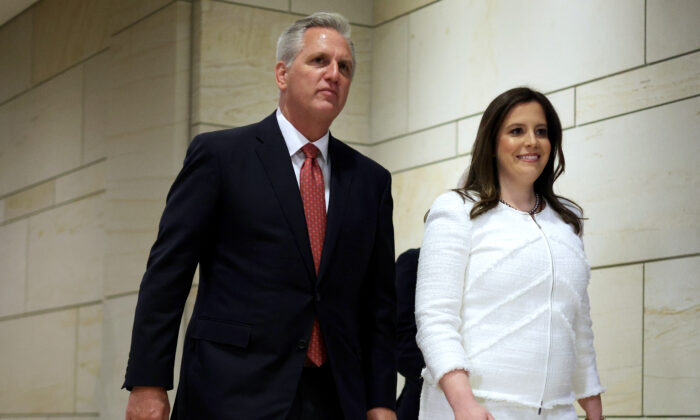 Leading House Republicans and veteran Hill investigators at the Heritage Foundation are deep into preparations for starting an unprecedented surge in congressional oversight next January, The Epoch Times has learned.

“Heritage’s Oversight Project is designed to make sure that the next Congress and the public have the information and support they need on day one. To date, we have close to 100 Freedom of Information Act (FOIA) requests out across the government,” Mike Howell told The Epoch Times.

“These have been informed by the deep policy expertise we have at The Heritage Foundation. Hopefully we get the information voluntarily, but we are prepared to litigate should there be any obstruction. The current Congress is giving the Biden administration a pass on oversight. This ends soon,” he said.

Howell knows all about oversight, having previously served as an attorney on the Senate Committee on Homeland Security and Government Affairs and the House Committee on Oversight and Reform, the two main congressional committees devoted to oversight investigations of the executive branch.

Howell also served during the Trump administration at the Department of Homeland Security’s (DHS) legal office as the chief contact for all congressional inquiries and investigations into the department’s multiple agencies and divisions.

Joining Howell on the Heritage project is Mark Morgan, former director of the U.S. Customs and Border Protection (CBP) agency, who is also a former assistant deputy director of the FBI’s Investigations Division.

Heritage announced its “Conservative Oversight Project” to minimal fanfare earlier this year. Even so, the project marks an ambitious expansion of efforts by the nation’s largest conservative think tank. Howell’s promise that Heritage will litigate whenever one of its FOIA requests isn’t handled according to the law is significant, because the think tank has never since its founding in 1973 gone to court on such an issue.

Republican investigative staffers on all 25 committees of the House of Representatives can expect 2023 to be their busiest year in a long time if voters return the GOP to majority control in November, because of House Minority Leader Kevin McCarthy (R-Calif.).

McCarthy told Breitbart News during last week’s House Republican retreat in Florida that preparing to assume control of House committees following a hoped-for November victory was one of the major topics of the gathering.

“What I’m doing at this retreat is we’re going to treat every single committee—and train every single member—how to do oversight and how to hold the administration accountable,” McCarthy said.

Comer told The Epoch Times on March 24 that he plans to conduct oversight that “exposes problems and offers solutions,” and says he’s “excited because I think the American people have a lot of questions about the Biden administration.”

The Kentucky Republican, who was first elected to the House in 2016, said “the mainstream media has given Biden a free pass the first year, despite all the crises he’s invented. The Democrats have turned a blind eye to it, and I think the voters are going to send a message in November that they want this administration to have oversight.”

Comer said House Republicans had for several months been sending notices to executive branch agencies, putting them on notice that documents and other information on important issues must be preserved.

“We’ve been asking for documents and requesting preservation of documents for many, many months, so we’re going to hit the ground running. The Biden administration will know pretty much what the House oversight committee will be wanting from them in January.”

Asked how administration officials have been responding to the preservation requests, Comer said, “We’ve requested these documents, they haven’t complied with very many of our requests, but hopefully they will in January if we are in the majority, and if not, then we’ll use other means that the majority has to get those documents.”

Jordan told The Epoch Times that “we are laying the groundwork, if in fact the American people put us in control, to do the right kind of oversight to get the truth for the country,” especially regarding, for example, the Department of Justice (DOJ) involvement with the National School Boards Association in targeting parents protesting the inclusion of critical race theory in public primary and secondary education curriculums.

“We will do the investigations that need to be done and then, if need be, issue the subpoenas that need to be issued. … There are so many Americans who have lost confidence in their government because of the abuses and concerns they’ve seen over the last several years, and that has to change, and we have to be willing to do whatever is necessary to force that change,” Jordan said.

Jordan emphasized that Republicans must “do the right things this year, get the right candidates—people who are committed to America First policies, committed to constitutional freedom and stopping the attacks on individual liberties.”

Jordan noted that the March 25 program at the House GOP Florida retreat included sessions focusing on the oversight preparations.

“Every single committee is going to have important work to do so the American people get the truth, and if you get to the end of the investigation and there are criminal referrals that need to be made, that those are made,” he said.

Jordan also lauded the Heritage effort. “The reason you are seeing that,” he said, “is that Americans have seen over the last 14 months the attacks on their rights by the Democrats. I’ve said this in probably every single speech I’ve given now, every single liberty we enjoy as Americans under the First Amendment has been assaulted by the Democrats.”

The assaults have targeted freedom of the press, freedom of religion, the right to assemble and petition the government, and freedom of speech, he said.

“Every one of them, so much so that you now have an outside think tank like the Heritage Foundation so focused on this, that’s how bad it’s gotten and why this oversight effort is so important.”

Correction: A previous version of this article incorrectly stated the agency that Mike Howell served in. The Epoch Times regrets the error.