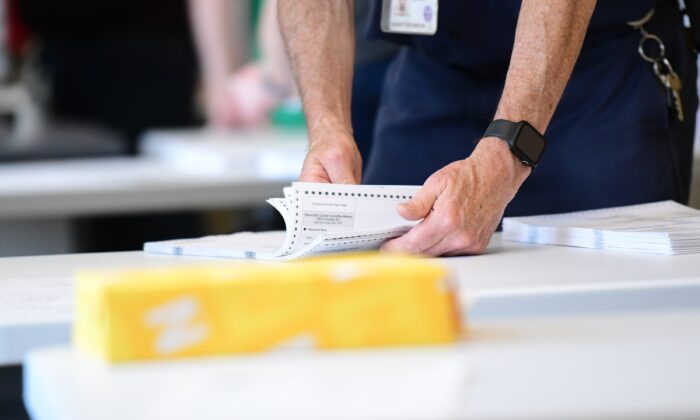 Polling analytics website FiveThirtyEight predicted that the Republican Party is favored to take the Senate as it shifted its previous “toss-up” prediction for the upper chamber .

The publication as of Saturday night lists Republicans’ odds of winning the Senate at 55 in 100, as opposed the Democrats’ 45 in 100 chances. Several days before that, it said that the Senate is in a “dead heat.”

RealClearPolitics, meanwhile, projected that the GOP has a higher likelihood of reclaiming the Senate following next Tuesday’s elections, possibly taking as many as 54 seats to the Democrats’ 46 seats. Now, Republicans are favored by the aggregator to win the seats in Arizona, Nevada, Georgia, Pennsylvania, and New Hampshire.

A poll (pdf) conducted by the Wall Street Journal this month revealed that suburban white women are breaking more and more in favor of the Republican Party. That demographic is now favoring Republicans for Congress by 15 percentage points, representing a 27-point swing from Democrats since the last WSJ poll in August.

“We’re talking about a collapse, if you will, in that group on the perceptions of the economy,” GOP pollster Tony Fabrizio told the paper. Fabrizio along with Democratic pollster John Anzalone conducted the survey for the Journal.

That poll, along with other polls, have shown that inflation is consistently the top issue among all voters. Republicans have frequently targeted the Biden administration’s and Democrats’ economic policies—including their favoring of vaccine mandates and COVID-19 lockdowns—and spending packages as a contributing factor to higher prices.

A poll from Quinnipiac released last week discovered that 36 percent of voters see inflation as the No. 1 issue, far outpacing the No. 2 choice, abortion, which garnered 10 percent. Following the Supreme Court’s decision in June to reverse Roe v. Wade, Democrats have made abortion one of their top campaign priorities.

“What issue concerns Americans most? It’s not even close,” Quinnipiac University Polling Analyst Tim Malloy wrote. “Inflation: the price of putting food on the table, paying for gas at the pump, and the diminishing value of the money they earn runs away with the ranking,” he added.

Some Democrats Are Optimistic

Senate Majority Leader Chuck Schumer (D-N.Y.) recently predicted his party will hold the Senate after the midterms despite forecasters saying the opposite.

“I don’t want to give the illusion that these are all slam dunks,” the New York Democrat said in reference to races in Pennsylvania, Georgia, Nevada, New Hampshire, and Arizona.

Meanwhile, President Joe Biden proclaimed Saturday in Southern California that he believes Democrats are “going to keep the Senate and pick up a seat,” while he added that Democrats “have a chance” to retake the House. Biden is slated to visit Pennsylvania on Sunday in a bid to bolster Democrat candidates, according to the White House.

At the moment, there are 50 Republicans, 48 Democrats, and two independents who caucus with Democrats in the Senate. For the House, there are 220 Democrats, 212 Republicans, and three vacancies. Historically, the party that’s in the White House tends to lose seats during midterm elections.

Data compiled by the U.S. Election Project show that in about 45 states, more than 39 million mail-in and early votes have been cast so far ahead of the midterms as of Sunday morning. The upcoming elections will be held Tuesday, Nov. 8.