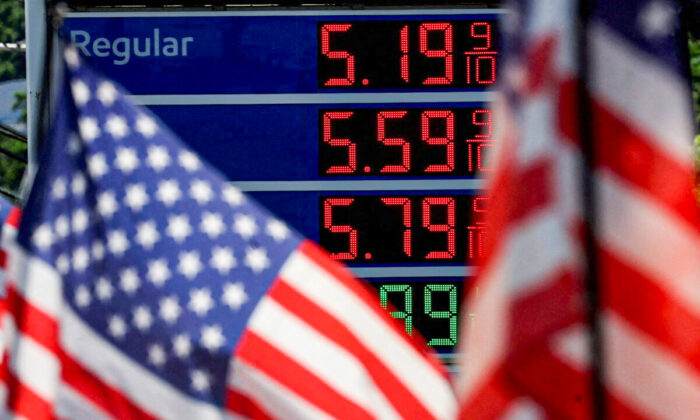 Gasoline prices at an Exxon gas station behind an American flag in Edgewater, N.J., on June 14, 2022. (Mike Segar/Reuters)
Viewpoints

“Gas is over $5! For regular?!” conservative talk show host Sean Hannity exclaims incessantly to his extensive radio audience. “Never in my life have I seen anything like that! Five dollar gas!”

Only it’s not. It might have been a month ago but today, according to the American Automobile Association (AAA), the national average for regular is $4.44. The general trend seems to be down. A month from now it might be $3.44, in two months maybe $3.01, and by the November election even lower.

The press, biased almost beyond recognition, will of course chortle. It was just a minor interruption—entirely Putin’s fault.

But how is this decline even possible? Didn’t de facto Saudi Arabian leader Mohammed bin Salman (aka MBS) give a cold shoulder to our president when he went to that country begging for the oil he had previously cut off from our own American pumps?

Most likely, yes, though MBS undoubtedly had more important things on his mind—like an imperialist Iran with nuclear weapons.

The ones actually in charge, especially of markets and prices, are the globalists, those folks who turn up in private jets at the World Economic Forum in Davos to inform us that by 2030 “You will own nothing and you will be happy.” (The corollary should be, “We will own everything, but we will be sad,” though I have a suspicion that’s not really true.)

Needless to say, these people are not keen on a Republican victory this November, nor a similar triumph in 2024 that would mark the return of MAGA whether via Gov. Ron DeSantis or Donald Trump himself. Bad news for them either way since they see democracy, in a republic or otherwise, as primitive and outdated. The people are just not intelligent or educated enough, in their view, to make decisions for themselves.

So they work undercover employing false flag propaganda gimmicks like “climate change” and ESG (environmental, social, and governance) to justify their ever-expanding exploitation of the masses. It’s a new form of communism with more power and control—and therefore, of course, more money—in the hands of so-called elites than anything heretofore invented.

Do their organizations—Goldman Sachs, Morgan Stanley, J.P. Morgan, and so forth—have the ability to manipulate the price at the pump and the Dow and Nasdaq as well?

Most likely, at least some of the way, enough to make a difference, to hold off a potential—or is it deliberate—economic disaster for a few months.

Those of us who seek a return to the America of only a few years ago should beware. It isn’t a time to be suckered. The economy is clearly in terrible shape with rampant inflation, but it can be patched up until November—perhaps not a whole lot, but just enough. Then, after November, that patch can be released like the cork on a kettle and all hell be let loose.

You want your mega-spend on every green dream Ocasio-Cortez ever wanted and more, you’ve got it, in the trillions. It’s rumored that even quantitive easing may be back—in which case, look out! You thought 9.1 percent inflation was bad? Try Weimar levels.

Therefore GOP leadership, reliable media like this one, and schizophrenic media like Fox News must keep their eyes open. I know wise economists like Larry Kudlow, Arthur Laffer, and Stephen Moore will. We should pay attention to what they’re saying and publicize it.

Maybe I’m wrong. Maybe things are already so bad they’re beyond even short-term manipulation, but, as Arthur Miller once wrote, “Attention must be paid.”

Those like Hannity—and he isn’t alone by a long shot—should avoid over-selling what’s enough of a problem if the simple truth is discussed. The public, thankfully, is getting smarter and will appreciate the most honest evaluation. After all, it’s “the economy, stupid,” as that Democrat from another era when at least some of them made sense, James Carville, put it.

Study those manipulations and try to report and publicize them as they are made. Stand by the truth and everything will be okay in the end.