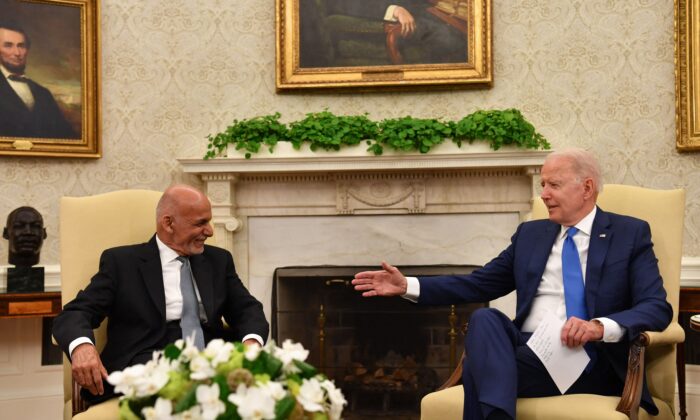 A group of Republican lawmakers on Thursday sent a letter to President Joe Biden, urging him to release a full, unedited, and unredacted transcript from his July phone call with exiled Afghanistan President Ashraf Ghani, who fled Kabul on Aug. 15, allowing the Taliban to take the capital unopposed.

The two leaders last spoke on the phone July 23, just weeks before the Taliban terrorist group seized control of Kabul. In their roughly 14-minute phone conversation, neither Biden nor Ashraf Ghani appeared aware of or prepared for the immediate danger of the entire country falling to insurgents, according to excerpts of a transcript reviewed by Reuters.

Biden in July allegedly pressured Ghani to “change perception” by backing a new military strategy and unveiling the details in a press conference with Afghanistan’s prominent political figures, according to the partial transcript.

“I need not tell you the perception around the world and in parts of Afghanistan, I believe, is that things are not going well in terms of the fight against the Taliban,” Biden said. “And there is a need, whether it is true or not, there is a need to project a different picture.”

The group of 27 House Republicans, led by Rep. Claudia Tenney (R-N.Y.), in their letter demanded answers from Biden, accusing the administration of making a “series of false assurances” to Americans and Afghan allies regarding the situation on the ground prior to the withdrawal of U.S. troops from the country.

“The contrast between your Administration’s official spin and the reality on the ground revealed a bewildering lack of coherence, strategy, and fundamental transparency,” the letter, obtained by the Daily Caller, reads.

“It appeared repeatedly as if your Administration was engaging in a deliberate effort to conceal the truth and mislead the American public. On August 31, new evidence emerged that suggests this is exactly what you have been doing since the start of this operation,” the lawmakers wrote.

The lawmakers also noted that the excerpts of the transcript reviewed by Reuters indicate that Biden promised to provide air support to the Afghan military, “a vow you never fulfilled.”

“This damning phone call further erodes your credibility and the confidence of the American people in your ability to lead. Your disturbing emphasis on ‘perception,’ a term you used four times in the Reuters excerpts of the call with Ghani, over substance and truth demands scrutiny and accountability,” they added.

The Republican lawmakers concluded their letter by requesting that Biden make the full, unedited, and unredacted transcripts of his July 23 conversation with Ghani public, so Congress can “determine the degree to which you may have deliberately misled the American people leading up to and during this disastrously executed operation.”

“The American people deserve answers and clarity. We urge that your administration expeditiously releases the full transcripts of the call,” they added.

Representatives for the White House didn’t immediately respond to a request for comment by The Epoch Times.

Months before he fled the country, Ghani, who is believed to be in the United Arab Emirates, claimed that his government could resist the terrorist group’s attacks without U.S. support, and that “no power in the world” could persuade him to get on a plane and leave the country.

“It is a country I love, and I will die defending,” he claimed in an interview with German news magazine Der Spiegel published on May 14.

The president’s words saw tens of thousands of Afghan families flee their homes, hoping to find safety from the approaching Taliban in Kabul.

He has since vowed to resist the Taliban from the Panjshir Valley, together with Ahmad Shah Massoud, the son of a former anti-Soviet mujahideen commander.