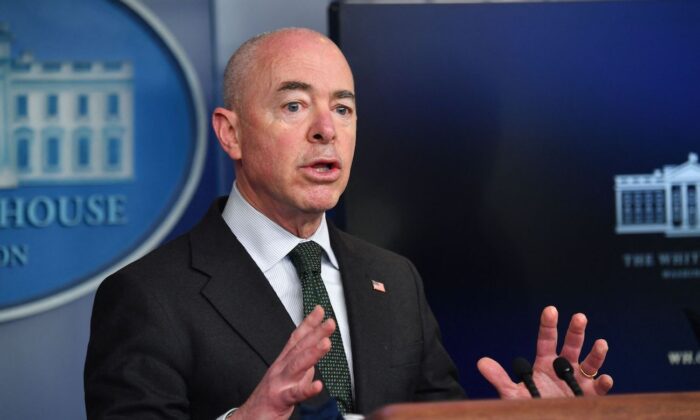 Homeland Security Secretary Alejandro Mayorkas holds a press briefing in the Brady Briefing Room of the White House on May 11, 2021. (Nicholas Kamm/AFP via Getty Images)
Republicans

A dozen Republican senators are seeking the immediate release of a Biden administration blueprint for expanding and overhauling the U.S. immigration system as outlined in a draft document obtained by selected media but not yet disclosed to Congress or the public.

In a joint letter to Homeland Security Secretary Alejandro Mayorkas (pdf), the senators demand the release of a 46-page draft called the “DHS Plan to Restore Trust in Our Legal Immigration System,” which was first reported by The New York Times and reportedly maps out the Biden administration’s plans for a significant expansion of the legal immigration system.

According to The New York Times, the document “lists scores of initiatives intended to reopen the country to more immigrants,” while not just rolling back some Trump-era policies but also “addressing backlogs and delays that plagued prior presidents.” Most of the policy proposals couldn’t be implemented by executive authority, but would require a broader overhaul of U.S. immigration laws, according to the report.

In the letter, the GOP lawmakers allege that the details are “being withheld from Congress and the American people,” which they find “particularly troubling, given the ongoing crisis at the southern border.”

Since President Joe Biden took office, there has been a historic surge in illegal immigration, a situation that Republicans have characterized as a “crisis” fueled by the president’s policies. Biden administration officials have disputed that characterization, including Mayorkas, who in recent Senate testimony insisted on using the term “challenge” to describe the problem while saying the administration has a strategy to cope with it.

But the senators expressed concern that some of the policies the blueprint reportedly contains would serve to exacerbate the problem by accelerating the flow of illegal immigration into the United States.

“We are deeply concerned that these policies will act as a pull factor to continue drawing illegal immigrants to the country—much like the policies already being implemented by the Biden Administration,” they wrote.

DHS officials didn’t immediately respond to a request by The Epoch Times for comment on the GOP letter and clarification on the timeline for the document’s release to the public.

The lawmakers also objected to what they characterized as Biden’s plans to “use and abuse executive authority to reshape our immigration system.

“In addition, the policies allegedly proposed in this document would open up new ways for immigrants to enter the country legally that extend well beyond the plain text and meaning of the law,” they wrote. “While there are many rational suggestions for reform in this document, these are decisions that must be made by Congress, and Congress alone, and not by the stroke of the President’s pen,” they wrote.

“A decision with such serious public safety consequences should be open and accessible, but instead, DHS has kept this information from everyone except a media ally.”