Republicans Celebrate Early in Franklin, Tennessee—But What Next? 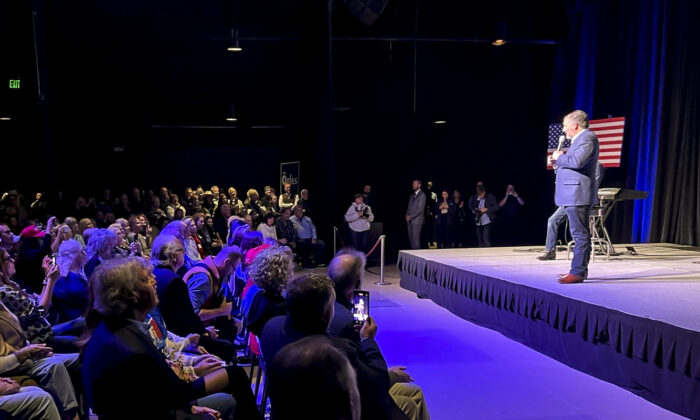 A full house of GOP loyalists at Franklin, Tennessee’s Jamison Theatre Wednesday night on Oct. 25 was in an upbeat mood.

Some will remember Ogles from the unique and well-attended—in person and across the country on Epoch TV—primary debate The Epoch Times staged with domain experts rather than reporters asking the questions.

Travis was the first to speak. He has, deservedly, become something of a local hero—he lives only two miles from the venue—not just for the tremendous national success of the “Clay & Buck” radio show but for personally confronting Williamson County officials as one of the parents in the uproar over what is being taught in the supposedly excellent schools of the rich Republican county (CRT, premature sexuality, gender craziness, and so forth).

Travis got a hero’s welcome and spoke with a relaxed fluency honed from having admirably replaced—for over a year now, I think—the acknowledged greatest of all radio personalities, Rush Limbaugh.

He then introduced Andy Ogles who was similarly welcomed. Recent developments have been good to Andy because, though I am reluctant to admit it, more important to his victory than The Epoch Times debate was his strong stance as mayor of Maury County against the vaccine mandates.

As increasing numbers of people are beginning to understand, just saying no, as Ogles did for his city and county, to the COVID-19 dictates of Dr. Anthony Fauci et al. was not only brave at the time, but also the correct and, most of all, healthy decision.

Wednesday night’s audience—maskless, of course—got that. Meanwhile, Ogles had improved his stump speech since I had last seen him. Already a member of the Freedom Caucus, he looks to be a force in Congress that Tennessee can be proud of.

Last on the bill was the most familiar face of all, Sen. Cruz of Texas, fresh off a rather amusing sojourn as a guest on the most unconsciously misogynistic show on television, The View. He was booed there, not surprisingly before he could even open his mouth, causing Whoopi Goldberg to have to hush the audience so he could speak, which he did admirably—the ladies were, to say the least, in over their heads arguing with him—and also to a far more politically sympathetic audience in Franklin.

But then the evening in Franklin took a very slight turn that was interesting.

For Cruz, this stop to support Ogles was part of his multi-state “Take Back America Tour.” He has also just published a new book on one of the most important, if not the most important subject of our times: “Justice Corrupted: How the Left Weaponized Our Legal System.”

Besides some kind things to say about Ogles, Cruz delivered what seemed like his stump speech in Franklin, hitting the usual conservative talking points of attack, like Biden’s 87,000 new IRS workers, suggesting they would be put to better use at the border.

But after a bit, there was a small ripple of discontent from the audience. Something was missing. What Cruz was saying wasn’t enough.

What was the GOP actually going to do if it took over the Senate and the House?

There are, after all, two Republican parties—with some variations, of course—the more traditional, consisting of those who are sometimes referred to as “Republicans in name only,” or RINOs, and those you might still call the Tea Party conservatives. Even as staunch a conservative as Cruz, the latter apparently think, could go further, could do more.

This was made clear when some in the audience started to call out “January 6 … What about January 6?” referring, of course, to those still locked up in what some think of as an American Gulag and the source of a government witch hunt.

Cruz, a bit surprised, seemed to mutter to himself but did not reply.

Then came “McConnell … Mitch McConnell,” this time about the man who might again be Senate Majority Leader and around whom there is much controversy, not just about his relationship with China but also about how he disperses campaign money.

Recently, there were accusations McConnell had withheld funds from Donald Bolduc in New Hampshire and Blake Masters in Arizona—both of whom were close in the polls—while delivering to Alaska’s Lisa Murkowski, who voted to impeach Trump and is anathema to much of the GOP rank-and-file.

Cruz did not respond to this either. Perhaps it was the wrong time and place.

In any case, the evening ended well, even with this sign of discontent, as many accepted Cruz’s invitation to sign his “Take Back America” tour bus and have their names displayed across the country.

The next morning I drove up to Westhaven, a Norman Rockwell-like community outside Franklin, to visit a weekly men’s group I had been meaning to attend consisting of conservative activists of “a certain age” for the book I am writing about the internal refugees from blue states to red.

They were engaging and knowledgeable folks, most of whom were immigrants from California and New York, and other places looking for red state freedom in Tennessee, sometimes successfully and sometimes not.

Several had attended the Jamison Theatre event the previous night and agreed it was generally fine but also left something to be desired.

I recognized one of the men as having been positioned close to me near the front.

“I was the one who called out ‘Mitch McConnell,’” he said proudly.

As a nonpartisan public charity, The Epoch Times does not endorse these statements and takes no position on political candidates.