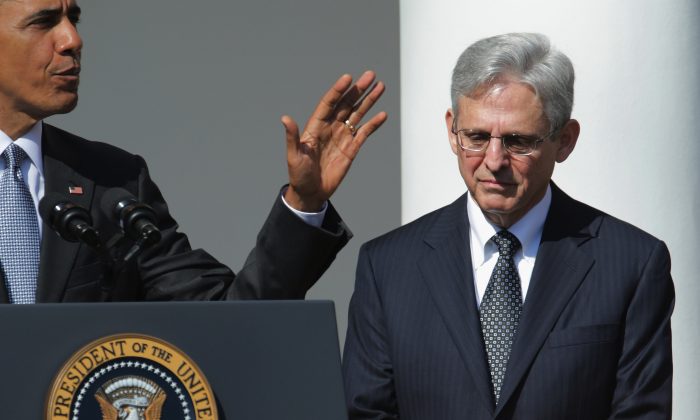 On one hand, Republicans in the Senate are publicly rejecting President Obama’s nominee for the Supreme Court Justice, Merrick Garland. On the other hand, some Republican Senators are looking at Garland’s moderate and bipartisan record and saying to themselves, “it could be worse.”

As Politico reports: “The Senate GOP’s Supreme Court blockade cracked almost immediately after President Barack Obama unveiled his nominee—even as Mitch McConnell and his allies reiterated their vow not to hold any confirmation hearings before the November elections.”

The report continues saying that a few Republicans are open to meeting Garland, whose centrist positions make him an appealing alternative to risking losses in November and then having a more liberal Justice nominated by Clinton.

Two Republican Senators that have expressed a willingness to meet with Garland are Kelly Ayotte of New Hampshire and Mark S. Kirk of Illinois. Both Senators are facing tough re-elections in November, reports The New York Times.

He does serve on the Circuit Court of Appeals, so I want to give him that courtesy.
— Kelly Ayotte (R-NH)

“I feel I would want to explain my position to the nominee,” said Ms. Ayotte. “He does serve on the Circuit Court of Appeals, so I want to give him that courtesy.”

The response from the Democratic side of the aisle was swift, with Senate Minority Leader Harry Reid saying in a press release:

Republicans are backing down so quickly that they’re already bargaining about what month they will fully cave and confirm Judge Garland… There is no question in my mind that Senator McConnell will back down from his position that the vacancy be filled by the ‘next president.’ Senator McConnell will cave and President Obama will fill this vacancy this year.

Since nominating Garland March 16, Obama and Senate Democrats have been pushing the “Do Your Job” campaign and hashtag #DoYourJob.

The celebration may be preemptive, given Majority Leader McConnell and other Republican Senators’ aversion to considering a hearing for Garland. Senators Lindsey Graham (R-SC) and Thom Tillis (R-NC) have already stated that they refuse to see the nominated judge.

“Seems to be a nice fella,” Graham remarked. “I wish him well.”

On Thursday, Garland met with Patrick Leahy (D-VT), the top Democrat on the Judiciary Committee, and then with Senate Minority Leader Harry Reid (D-NV) in private, but Garland did not meet with any Senate Republicans.