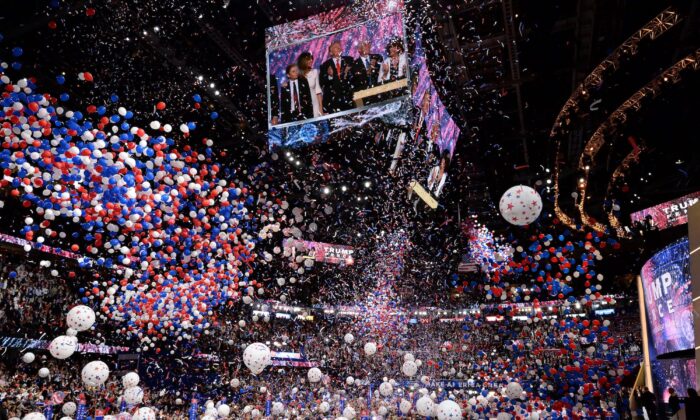 Balloons fall over the crowd during Republican Party's nomination for president, at the Republican National Convention in Cleveland, Ohio, on July 21, 2016. (Robyn Beck/AFP/Getty Images)
Republicans

Republican National Convention to Be Held in Milwaukee in 2024: RNC Chairwoman

Republicans will head to Milwaukee, Wisconsin, to select their next presidential nominee, according to the chair of the Republican National Committee (RNC) on Friday.

“Milwaukee is a world-class city, and we are eager to see it shine in the spotlight come 2024,” RNC Chairwoman Ronna McDaniel wrote on Twitter after an RNC committee vote on Friday.

Nashville, Tennessee, was the other city that was being considered to host the 2024 RNC convention. Tennessee, meanwhile, has not backed a Democrat since 1996 during the presidential elections. For years now, the GOP has placed its nominating convention in swing states.

Democrats haven’t announced yet where their 2024 convention will take place. Officials in the party have suggested changing its primary calendar to replace Iowa and New Hampshire as the first two states in their nominating process.

Democrats planned to host their 2020 convention in Milwaukee, a city that has long been dominated by Democrats, but they decided to hold their event virtually amid COVID-19 rules. However, Wisconsin is considered a key swing state—officially decided by 20,000 votes during the 2020 presidential election.

“We recognize that there’s a history there, that voters are very in tune. Retail is key to winning the nomination in both of those states… we are very proud to have kept our calendar the same,” McDaniel told Fox News Friday. “I hope that people in those states recognize that the Democrats just walked away from their states.”

The mayor of Milwaukee as well as business leaders hailed the move.

“Milwaukee welcomes the 2024 Republican National Convention. My city is ready to show the world what a great destination we are for conventions and tourism,” Milwaukee Mayor Cavalier Johnson, a Democrat, said in a statement after the RNC’s announcement. “We look forward to the positive economic impact of the Presidential nomination convention, and, as the host city, I am confident all the attendees will find Milwaukee to be a splendid location for the event.”

“The Republican National Committee’s decision to bring its convention to Milwaukee represents yet another step forward for our region as an internationally recognized destination with the people, vibrant entertainment venues, infrastructure and expertise it takes to successfully host large-scale events,” said Tim Sheehy, president of the Metropolitan Milwaukee Association of Commerce.

Wisconsin Republican Party Chair Paul Farrow, who was in Chicago for the RNC meeting, said having the convention come to Milwaukee will “energize our base even more to realize we’re a very important hinge in the entire country.”