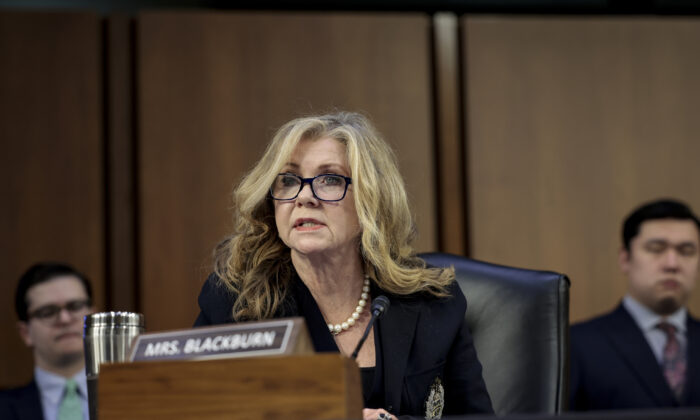 Sen. Marsha Blackburn (R-Tenn.) has requested TikTok appear before the Senate for a hearing over concerns that the China-based video-sharing app has access to U.S. data.

The lawmaker together with eight colleagues, including Ted Cruz (R-Fla.) and Roy Blunt (R-Mo.),  raised the issue with the company in a June 27 letter (pdf) that followed a BuzzFeed report published June 17 based on leaked audio from 80 TikTok internal meetings.

BuzzFeed reported that 14 statements made by nine different TikTok employees indicated that “engineers in China had access to U.S. data between September 2021 and January 2022, at the very least.”

The news outlet also referred to “one Beijing-based engineer as a ‘Master Admin’” who “has access to everything.”

According to BuzzFeed, U.S. engineers had to rely on their China-based colleagues “to determine how U.S. user data was flowing,” as they are not allowed to access the data on their own.

The detail was confirmed by eight different employees in nine statements.

The article pointed out that the statements bear a stark contrast to the sworn testimony by a TikTok executive in an October 2021 Senate hearing that a “world-renowned, U.S.-based security team” handled access to user data.

In their letter, the lawmakers pointed to the TikTok statement and alleged the Chinese company of misleading congressmen in relation to user data access.

“It appears that TikTok is now taking steps to deflect from its own knowing misrepresentations by changing the way in which ‘protected’ data can be accessed by its employees,” the letter further read.

Chew admitted that their Chinese staff are provided with access to U.S. data but emphasized that robust control is imposed on them under the supervision of a U.S.-based security team.

He further dismissed the findings from the news report, claiming that they are “incorrect and are not supported by facts.”

In response to a query regarding the disclosure of U.S. data to the Chinese Communist Party, the CEO briefly said that they had not received such a request and would not comply with the order if asked.

Chew reiterated that data of American users will now be migrated to Oracle servers in the United States, with some backups being kept in Singapore, which is the same statement made by TikTok prior to the BuzzFeed report.

Adam Segal, director of the Digital and Cyberspace Policy Program at the Council on Foreign Relations, told BuzzFeed he was concerned that data would still be at risk of falling into the hands of Chinese intelligence if it can be accessed from China no matter where the data center is located.

‘TikTok Needs to Come Back and Testify’

This is the same concern, that lawmaker Blackburn shared and she has demanded the Chinese entity testify before the Senate.

“TikTok’s response confirms that our fears regarding [Chinese Communist Party] influence within the company are well-founded,” Blackburn told NBC News.

“They should have come clean from the start but instead tried to shroud their work in secrecy. Americans need to know that if they are on TikTok, Communist China has their information. TikTok needs to come back and testify before Congress.”

Since then, Trump’s order has been stalled by several lawsuits and court orders.

In June 2021, President Joe Biden revoked the executive order, instead directing the Commerce Department to evaluate the platform to determine whether it poses a national security risk.