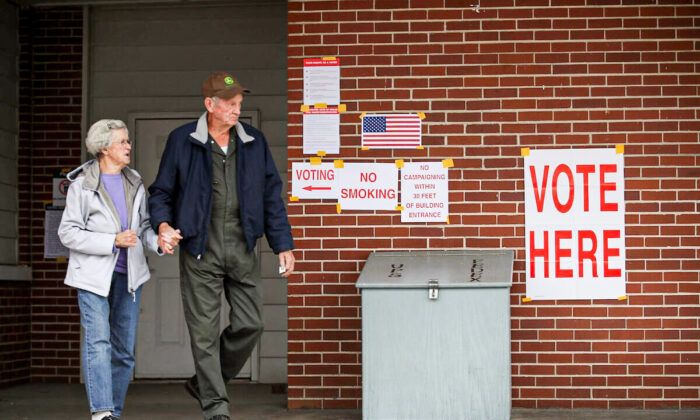 Voters exit after casting their ballots at a polling station setup in the fire department in a file photo. (Joe Raedle/Getty Images)
2022 Midterm Elections

Endorsements from top Democrats including President Barack Obama and House Majority Whip Jim Clyburn (D-S.C.) were not enough to secure a victory for the Democrat mayoral candidate in Columbia, South Carolina.

Richland County, where Columbia is located, saw President Joe Biden win by 38 percentage points last year. According to a New York Times analysis of the election, precincts in Columbia overwhelming voted in favor of Biden.

“I’m just overwhelmed by all the support from the business community, the citizens of Columbia, the young people and the old, a cross-section of people,” Rickenmann said in his victory speech, according to local media. “I’m just excited about the opportunity to serve them and get to work.”

Obama had released an audio message to support Devine, and the former president himself carried Richland County by 29 points and 33 points in 2008 and 2012, respectively. Clyburn, a top ally of Biden and whose congressional district also includes parts of Columbia, also endorsed Devine.

Following Rickenmann’s win over Devine, Republicans say it’s evidence of a growing “red wave” that will see Republicans re-capture the House during the 2022 midterms.

Sen. Rick Scott (R-Fla.), the head of the Senate GOP’s reelection arm, noted that Columbia “has been led by Dem mayors for 30 years,” while Biden won by 30 points last year.

“But last night, Republican [Rickenmann] had a big win,” he wrote. “The red wave is coming!”

Earlier this month, Republican Glenn Youngkin defeated Democrat Terry McAuliffe in what some analysts said was a major victory for Republicans in a reliably blue state that hasn’t had a Republican governor for more than a decade. Biden won by 10 percentage points in the state last year.

The GOP was also able to pick up wins in Long Island, while Republican Jack Ciattarelli nearly defeated Democrat Gov. Phil Murphy in nearby New Jersey—also considered a reliably blue state that Biden handily won in 2020.

Following the Virginia loss, House Democrats have signaled that Biden needs to improve messaging on his agenda ahead of the 2022 midterms.

“The results in Virginia and elsewhere ought to be a wake-up call that we’re not getting the job done on messaging. It starts with the president,” Rep. Sean Patrick Maloney (D-N.Y.), the head of the Democratic Congressional Campaign Committee, told The New York Times on Nov. 9.

Democrats, Maloney argued, need to place priority on “[growing] the economy and end the pandemic. But close behind that is telling people what you’ve done.”

Some analysts noted that Youngkin saw a boost from worried Virginia parents who are concerned about the curriculum being taught in public schools—namely around critical race theory. James Carville, a longtime Democratic strategist who worked in the Clinton administration, said Democrats need to pull back from the brink of “stupid wokeness” or else they’ll lose more elections.

But Maloney disagreed with that assessment, instead arguing that Carville and others are making a “false choice” between “fighting for racial justice and public safety.” Democrats, he said, “can do both,” without elaborating how.