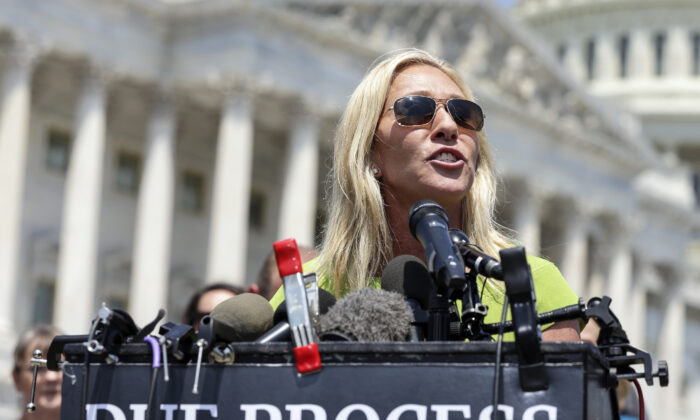 During a June 15 press conference, a small band of Republican lawmakers blasted the treatment of “political prisoners” in the “D.C. gulag,” discussing disturbing cases of mistreatment of defendants charged in the Jan. 6, 2021, Capitol breach and calling on other lawmakers to join them in decrying the situation.

In the wake of the Jan. 6, 2021, “Stop the Steal” rally, many supporters of President Donald Trump who entered the Capitol building were systematically rounded up. Many have been held in the D.C. jail awaiting trial for over a year, with numerous reports of horrific conditions inside the facility.

In December 2021 Rep. Marjorie Taylor Greene (R-Ga.), who has been one of the most outspoken critics of the treatment of these “political prisoners,” unveiled a report on the situation inside the D.C. jail.

These detainees have faced “nothing short of human rights violations,” Greene and a smattering of Republican colleagues said upon unveiling their report.

On June 15, a group of Republican congressmen, including Reps. Greene, Louie Gohmert (R-Texas), Andy Biggs (R-Ariz.), and Troy Nehls (R-Texas), again hosted a conference to bring attention to the treatment of these detainees, bringing to light new information about the abuses they have suffered.

‘What If It Was You?’: Greene Decries Conditions In ‘DC Gulag’

During an impassioned speech, Greene blasted the treatment of detainees in what she called the “D.C. gulag.”

January 6 defendants, she said, are “being used as pawns to dangle in front of [Americans] to show that if you cross a certain line, if you support a certain president—as in President Trump—or if you dare to speak up against the government or … against an election being stolen, you’re going to be used. This is what’s gonna happen to you. You’re gonna spend your days wasting away in solitary confinement.

“Shame on them. Shame on the Dept of Justice. Shame on all these judges here who are allowing this to happen, shame on [Washington] Mayor Muriel Bowser.”

Greene has on various occasions sent Bowser letters requesting information and changes to the treatment of these detainees, but these have gone ignored, Greene said.

“Everyone should care about this,” Greene said. “You wanna know why? Because it shouldn’t happen in America. This isn’t communist China, this isn’t Venezuela, this isn’t Russia, this isn’t some other country—this is the United States of America.”

Citing the summer 2020 Black Lives Matter riots, which caused billions in damage across the United States and resulted in many violent rioters avoiding charges, Greene said that the treatment of January 6 defendants shows that the United States has a “two-tiered justice system.”

“They got let off, and not only did they get let off—they got bailed out by our now-vice president, Kamala Harris, and Congresswoman Ilhan Omar” Greene said of the rioters. “You haven’t seen Republicans bailing [January 6 defendants] out or paying their attorney fees. But that’s exactly what Democrats did—and they were cheered on.”

“And here we have these peoples’ rights being abused, and nobody gives a damn,” Greene said of the January 6 defendants.

Greene, who after months of pushing was finally allowed to enter the D.C. jail, described horrific conditions for January 6 detainees.

“I saw men who hadn’t had a haircut, couldn’t shave, they were filthy, dirty, and disgusting, they looked extremely unhealthy because [they are forced to] choose between going outside an hour a day or calling their family,” Greene reported.

“While I was in there, congressman Gohmert and I met people who had been denied medical treatment,” Greene said later. “I met a man whose finger was broken and turned sideways … I met another man whose entire arm was purple. And [the other defendants] all begged me, ‘Please, if you help anyone help him. He needs a doctor.'”

During another speech, Gohmert added, “There’s still very concerning things that are going on [in facilities housing January 6 defendants],” Gohmert said. “This should concern every American because it could be you next.”

For example, he said, January 6 defendants were forced to go into solitary quarantine for two weeks if they meet with their lawyers—allegedly an anti-COVID measure, but one that Gohmert suggested is intended far more punitively.

Not helping the plight of these defendants, Gohmert said, is a “hateful” deputy warden, Kathleen Landerkin, who has in the past posted virulently anti-Trump statements online.

Closing her remarks, Greene said that by refusing to aid the plight of these detainees, “We’re making a mockery of ourselves [as Americans].”

Several speakers at the event, hosted by the Patriot Freedom Project, which advocates for January 6 defendants, also noted the legal rights abuses that these detainees have faced.

“This has been a weaponization of the court system, the Department of Justice, and of the prison system,” ruled Rep. Biggs, who said that the defendants have been denied due process.

“That should never happen anywhere in this nation, but it’s happening right here in the nation’s Capitol,” Biggs said. “It’s a scourge, a pox on this country. We should all be embarrassed by that.”

Pointing to conditions described by lawmakers who visited the facilities and by inmates themselves, Biggs also argued that “international law would say what’s happened to [Jan. 6 defendants] is torture.”

“What’s happening here is not anything more than the politicization and weaponization of America’s justice system,” Biggs concluded. “God help us all if we don’t stop it today.”

The conditions faced by January 6 defendants, which would not be permissible at almost any other facility, have been allowed to stand “because of the people held inside the jail,” Rep. Nehls said.

Aside from being forcibly quarantined if they meet with their attorneys, Gohmert also noted that pretrial detainment of defendants as a punitive measure, which January 6 defendants have faced, is illegal under rulings by the Supreme Court.

Another speaker, Patriot Freedom Project founder Cynthia Hale, who the wife of a January 6 defendant, also blasted the legal treatment that these detainees have received at the hands of D.C. juries.

Hale’s husband was recently convicted by what Hale described as “an incredibly biased D.C. jury” of obstructing a session of Congress. The evidence presented against him, she said, was the suit and tie he wore on January 6 and a Trump flag he picked up inside the Capitol.

Hale called for the trials of January 6 defendants to be moved out of D.C., which in recent presidential elections voted over 95 percent Democrat. The political demographics of D.C., Hale said, make it impossible for these defendants to receive a fair trial.

Her husband, Hale said, has spent much of the past year and a half in solitary confinement despite being a nonviolent offender, “has been denied medical treatment on several occasions, he does not see the sun, and I anticipate many health issues due to inadequate nutrition.”

Another speaker, who introduced herself only as Angela, described the “horrendous” conditions faced by her son—a U.S. Army combat vet who served in Afghanistan—at the D.C. jail and Northern Neck Regional Detention Facility, including a sexual assault by guards.

Before his incarceration, she said, her son was on track to become a history teacher, though still suffering from both the physical and mental scars of his combat tours in Afghanistan; he had never been charged with a crime, she noted.

Moving on to a discussion of the conditions he has faced, Angela said, “The conditions at the D.C. jail are horrendous.”

“His rations often smell like cleaning fluid,” she said. “There were pubic hairs included in [some] portions of his food. The drinking water was visibly dirty. Mold was visible in cells. And roaches lived among them.”

Her son was ultimately moved out of the facility in November 2021 after an “unprovoked assault” by facility guards.

“The unprovoked assault, by no less than five guards,” the defendant’s mother said, voice breaking, “included graphic sexual components and resulted in his transfer.”

This, she said, despite her son having received no infractions for bad behavior during the entirety of his detention.

“It was believed that this assault was in retaliation for meeting with his representation,” she added.

While incarcerated, she said, her son has organized religious services for defendants, including Bible studies and celebrations on Easter and Christmas.

Various motions to have her son released in advance of his trial have been denied—suggesting, she said, that the pretrial detention of her son has been “completely punitive.”

Concluding her remarks, the defendant’s mother read aloud a statement prepared by her son.

“All the physical, emotional, psychological, and legal abuses you have heard about the first American political prisoners’ suffering at the hands of their jailers are true,” he wrote.

“I am limited to seeing the blue sky for a single hour once every seven days—if [the facility] feels like providing outside recreation.

“Ants crawl all over my body when I go to sleep in my bunk and constantly swarm my commissary. Cockroaches jumping out of my food is a frequent occurrence. Mouse poop is in the cereal and on dry food. At times there are yellow [urine] stains in dry foods such as Rice Krispies. There are swarms of rats in the kitchen. The bathrooms have constant sitting rancid water due to the toilets leaking fecal matter. Black, leech-like insects emerge inside of the drains and flies constantly buzz around all the living areas.

“Absolutely no in-person visitation is permitted from anyone I know other than my attorney—that’s been for over a year.

“No books can be sent to me.

“No consistent access to discovery evidence is taking place. There is only one outdated computer for the entire jail shared by over 400 inmates.

“In my 365 days of incarceration, I have been able to spend minimal hours on discovery—and my trial is 11 weeks away.

“Guards [at both facilities I have been at] antagonize people.

“In the D.C. jail, I was assaulted and harassed. I am no murderer. I am no rapist. I am no arsonist. Before this, I have never been arrested. And yet, I have no hope for bond.”

Despite mounting reports of similar conditions faced by other January 6 detainees, most members of Congress—Democrats and Republicans alike—have refrained from highlighting the issue.

The June 15 press conference came as the House January 6 Committee, which has been described as a “partisan witch hunt” by Trump and other Republicans, enters its third day of public hearings.

During the first hearing, the panel claimed that the January 6 Capitol breach was an attempted “insurrection” against the United States directed and organized by Trump and his allies.

During the second, it moved to challenge Trump’s claims of widespread election fraud as part of its effort to bolster this claim.

However, the treatment of January 6 defendants has not come up in these hearings, and the commission seems unlikely to discuss the issue anytime soon.

The D.C. Metropolitan Jail and Northern Necks Regional Detention Facility did not immediately reply to a request for comment.