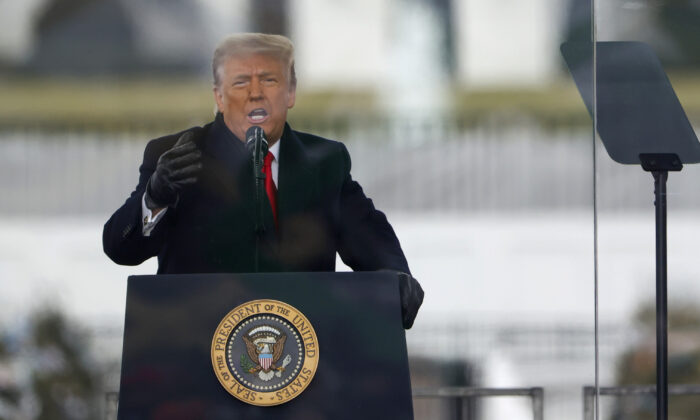 The Democrat-backed resolution calls on Pence and the Cabinet to “declare what is obvious to a horrified Nation: That the President is unable to successfully discharge the duties and powers of his office.”

Democrats can now bring the resolution up for a vote on Jan. 12. Last week, Mooney was among the Republican lawmakers who didn’t vote to certify key states for President-elect Joe Biden.

Pence hasn’t issued a public comment on the matter. The Epoch Times has reached out to the White House for comment.

It came after House Speaker Nancy Pelosi (D-Calif.) on Jan. 10 said lawmakers need to “act with urgency” and said Trump is an immediate danger to the Constitution. The move came after protesters breached the U.S. Capitol building, with Democrats claiming that Trump incited violence.

In a Jan. 11 statement after the resolution was blocked, Pelosi stated: “The House Republicans rejected this legislation to protect America, enabling the President’s unhinged, unstable and deranged acts of sedition to continue. Their complicity endangers America, erodes our Democracy, and it must end.

On Jan. 10, Pelosi said on CBS News’ “60 Minutes” that she prefers using the 25th Amendment—which requires Pence and a majority of Cabinet members to initiate—over impeachment.

On Jan. 11, Rep. Tom Emmer (R-Minn.), head of the campaign arm for House Republicans, said it would be better if Democrats and Republicans worked to resolve differences before Jan. 20.

“The violence we saw unfold in our nation’s capital last week has no place in our democracy,” Emmer said. “It was a disgusting and dangerous spectacle that ultimately cost people their lives.

“It is a politically motivated effort by Nancy Pelosi and House Democrats that will fracture our nation even more instead of bringing us together.”

The lawmaker noted that the anger that sparked the Capitol breach was, in part, triggered by years of “fomenting the type of vitriol that has been dividing our nation over the course of many years, and it has to stop.”

Trump told the crowd beforehand that their protest suggests “the kind of pride and boldness that they need to take back our country” and “let us walk down Pennsylvania Avenue.” The president didn’t tell the protesters to breach the Capitol or commit acts of violence and later condemned the violence that occurred. Trump told the protesters to “peacefully and patriotically make your voices be heard.”

Also on Jan. 11, House Democrats introduced an article of impeachment and charged the president with “incitement of insurrection.”

“He also willfully made statements that, in context, encouraged—and foreseeably resulted in—lawless action at the Capitol,” the resolution stated. “Members of the crowd he had addressed, in an attempt to, among other objectives, interfere with the Joint Session’s solemn constitutional duty to certify the results of the 2020 Presidential election, unlawfully breached and vandalized the Capitol, injured and killed law enforcement personnel, menaced Members of Congress, the Vice President, and Congressional personnel, and engaged in other violent, deadly, destructive, and seditious acts.”

“The case cannot come to trial in the Senate. Because the Senate has rules, and the rules would not allow the case to come to trial until—according to the majority leader—until 1 p.m. on Jan. 20, an hour after President Trump leaves office,” Dershowitz said in a Jan. 10 Fox Business interview.