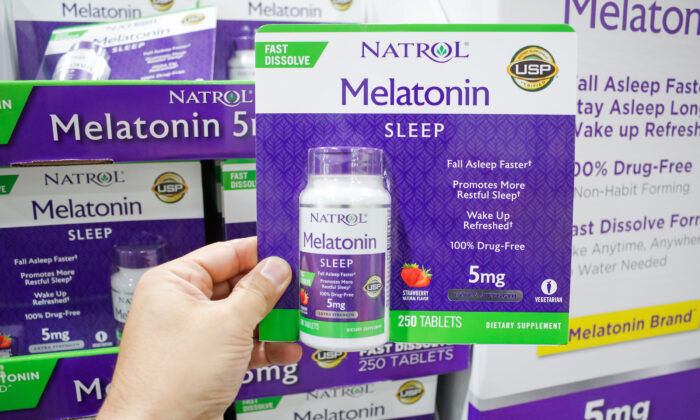 A melatonin supplement in an undated file photo. (TonelsonProductions/Shutterstock)
US News

The number of reports of melatonin poisonings in children has risen dramatically over the past decade, according to a Centers for Disease Control and Prevention (CDC) report released on Friday.

The report, led by Dr. Karima Lelak, a pediatrician at the Children’s Hospital of Michigan, assessed isolated melatonin ingestions among children, adolescents, and young adults aged 19 and under between Jan. 1, 2012–Dec. 31, 2021.

Melatonin is a hormone that the brain produces in response to darkness and which plays an important role in sleep. It is sold as an over-the-counter dietary supplement or sleep aid in the United States in a range of doses for both adults and children.

Of those who needed treatment, 19,892 were discharged, 4,097 were hospitalized, and 287 required intensive care.

Both deaths occurred in children aged 2 and under (3 months and 13 months) and occurred in the home. One ingestion involved intentional medication misuse while the authors noted that the reason for the other death is unknown.

Researchers said 94.3 percent of the poisonings were unintentional, involved male children under 5, and 99 percent occurred in the home and were managed on-site.

A total of 82.8 percent of children were asymptomatic although symptoms reported to NPDS included those involving the gastrointestinal, cardiovascular, or central nervous systems.

According to the study, the largest yearly increase (37.9 percent) occurred from 2019 to 2020. In 2021, pediatric melatonin ingestions accounted for 4.9 percent of all pediatric ingestions, compared with 0.6 percent in 2012.

“Increasing use of over-the-counter melatonin might place children at risk for potential adverse events,” the study authors wrote. “Public health initiatives should focus on raising awareness of increasing numbers of melatonin ingestions among children and on the development of preventive measures to eliminate this risk.”

Melatonin is regulated by the Food and Drug Administration as a dietary supplement and sales of the hormone are on the up, rising from $285 million in 2016 to $820 million in 2020 across the United States, according to the market research group Statista.

In March, researchers led by Dr. Naima Covassin from the Mayo Clinic examined data on melatonin use collected by the National Health and Nutrition Examination Survey between 1999 and 2018 across 55,000 adults aged 20 and older.

Owing to its increasing popularity, children are at increased risk for melatonin exposure.

The CDC report authors cited another study published in 2017 which found that the melatonin content differed by nearly 10 percent from what was stated on the label in more than 71 percent of supplements analyzed by researchers.

“To address this, manufacturers require increased controls to ensure melatonin supplements meet both their label claim, and also are free from contaminants, such as serotonin,” researchers of that study wrote.

CDC reporters noted three limitations to their study: the fact that the data submitted to the poison control center is voluntary and may underestimate actual exposures, leading to “selection and information bias”, the inability to confirm the accuracy of each case reported to the poison control center and the lack of patient medical records or medical examiner reports to accompany the reports, and no confirmation that a death was due to the toxic effects of melatonin ingestions or because of previous underlying health conditions.