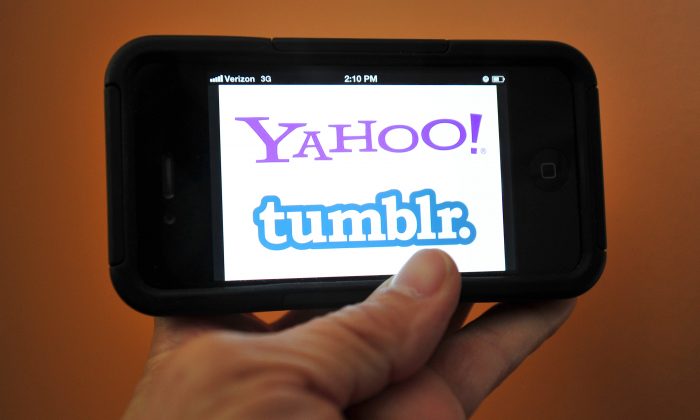 The splash page for Yahoo and blogging startup Tumblr are seen on an iPhone. Yahoo's board of directors reportedly approved the acquisition of Tumblr Sunday. (Karen Bleier/AFP/Getty Images)
US

If indeed approved the deal is expected to be announced in New York on Monday at a Yahoo press conference.

In an invitation sent Friday, Yahoo promised to unveil “something special” Monday evening in New York. The event is being held in a Times Squares lounge located about two miles from Tumblr’s headquarters.

Yahoo has only said that Mayer will be on hand to unveil something related to a product.

Information about the potential deal was first reported on Friday by technology blog AllThingsD.

Tumblr has around 117 million unique users. Buying Tumblr would fulfill the goal of Yahoo’s CEO Marissa Maye to reach a wider audience on smartphones and tablet computers.

If it’s completed, the Tumblr deal would be Mayer’s biggest coup—and, at the same time, the biggest risk—since she ended her 13-year career as a key executive at Google Inc. to try to snap Yahoo out of a prolonged malaise that had demoralized employees and investors alike.

Tumblr, founded in 2007 by its CEO David Karp, presumably would become a pivotal part of Mayer’s effort to sell more advertising.

Mayer has been winning back investors, even though the company’s revenue is still lagging behind the overall growth of the booming Internet and mobile advertising market. Yahoo’s stock price has risen 69 percent under Mayer’s leadership.