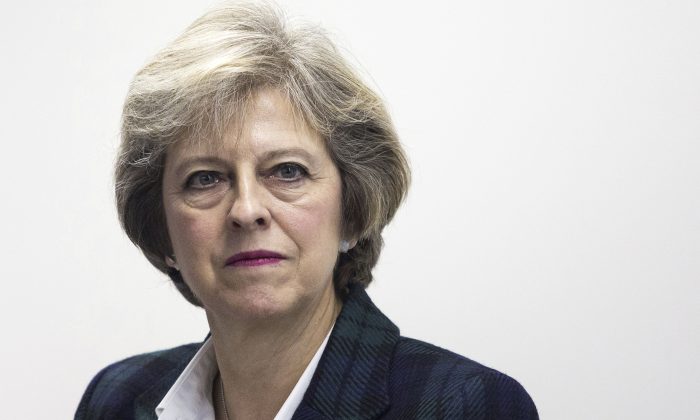 British Prime Minister Theresa May, reacts during a visit to Diabetes UK, where she opened their new charity headquarters in east London, Monday Nov. 14, 2016. Britain will be a "global champion of free trade," according to details of a speech by Prime Minister Theresa May released Monday, acknowledging that the U.S. election of Donald Trump and the U.K. vote to leave the European Union mark an era of profound world change. (Jack Taylor / PA via AP)
Europe

Report: UK Government Said to Have No Coherent Plan for Brexit

LONDON—A memo prepared by a consultant to the British government says ministers have no coherent plan for leaving the European Union and may need to hire up to 30,000 civil servants to complete the country’s exit from the 28-nation bloc, the Times of London reported Tuesday.

The newspaper said the leaked memo—prepared by a consultant for the Cabinet Office—says splits within Prime Minister Theresa May’s team have delayed development of a negotiating strategy and that it may take another six months to come up with a plan.

The prime minister’s office said “this is not a government report and we don’t recognize the claims made in it.” Transport Secretary Chris Grayling told Sky News that “I haven’t seen any evidence of the kind of splits discussed” in the leaked document.

The Times said the memo was written by a consultant on his own initiative, not at government request. The BBC also said it had seen the document.

The government says it will trigger two years of formal exit talks with the EU by March 31.

The memo, dated Nov. 7 and titled “Brexit update,” reportedly says that “despite extended debate among (department) permanent secretaries, no common strategy has emerged.”

It says this is partly because May is “drawing in decisions and details to settle matters herself.”

May: UK Will Back Free Trade; Farage Not a Trump Go-between

It says individual departments are working on projects related to Britain’s exit—500 in all—but that “there is no prioritization and no link to the overall negotiation strategy.”

May took office in July, after Britons voted to leave the EU. She had campaigned to stay in, but has promised she will deliver on voters’ decision to leave. Her Cabinet contains both “remain” backers like Treasury Chief Philip Hammond and “leave” supporters including Foreign Secretary Boris Johnson.

The government has declined to say what sort of deal Britain will seek with the EU—including whether it will try to keep Britain in the bloc’s single market for goods and services, something many British businesses desire.