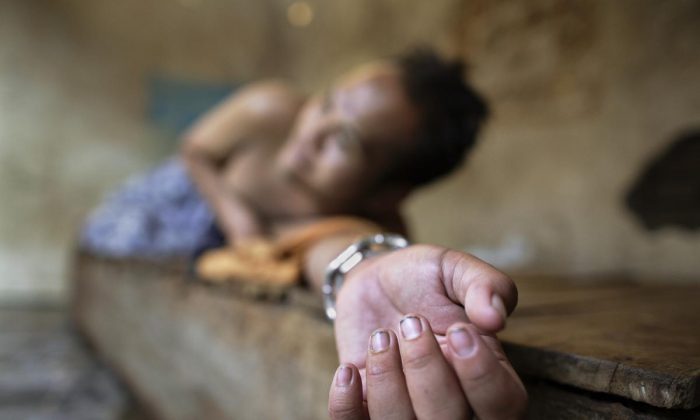 A recent report revealed that 18,800 people with psychosocial disabilities are currently chained and confined in small spaces in Indonesia.

The data released by the non-profit Human Rights Watch also stated that 57,000 people with real or perceived mental health conditions have been shackled and confined, a practice known as pasung, at least once in their life.

The Indonesian Ministry of Health has recognized pasung as inhumane and discriminatory and the practice has been banned by the government for decades.

The thought that someone has been living in her own excrement and urine for 15 years … is just horrifying.
— Kriti Sharma, Human Rights Watch

In the Human Rights Watch report, the longest case involved a woman who was chained and confined for 15 years in a shed by her father who believed she was bewitched.

“The thought that someone has been living in her own excrement and urine for 15 years in a locked room, isolated, never seeing her friends, and not given any care whatsoever is just horrifying,” said Human Right Watch’s Kriti Sharma.

“There are just no words to describe what a person is going through if they have been reduced to a state that is worse than for an animal,” she added.

The report showed that the misunderstanding and awareness regarding mental health, along with insufficient community-based voluntary services, have allowed pasung to continue.

“There is little awareness about mental health and a lot of superstition,” said Sharma.

People often think that mental health conditions are a result of a sin or a curse.
— Kriti Sharma, Human Rights Watch

“People often think that mental health conditions are a result of a sin or a curse, that these people are possessed by evil spirits or the devil. Families will first seek a traditional healer to find a solution to this ‘supernatural’ problem.”

Sharma said that if the visit does not help, families end up locking up the individual with psychosocial disabilities themselves.

The lack of medical help is a problem in Indonesia as well. Data from the Ministry of Health shows that almost 90 percent of individuals seeking mental health care are not able to. There are only 48 mental hospitals to serve the country’s population of 250 million, which means there is only one psychiatrist per 300,000 to 400,000 people.

Those who do stay at mental health facilities are subject to abuse.

Human Rights Watch said that because of lack of government support and monitoring,  individuals with psychosocial disabilities lived in overcrowded and unsanitary conditions.

In the facilities—where there is barely space to walk—overcrowding contributes to lice and skin conditions such as scabies.

“They shaved my head because there is a lot of lice,” said a woman staying at an institution.

“They never give lice shampoo. They shave my head every three months. They shave everyone’s hair,” she continued.

Human Rights Watch also found male staff entering and exiting women’s wards or sections at will, or were placed in charge of the women’s unit at night, putting women and girls at risk of sexual harassment and violence.

On the other hand, in traditional or religious healing centers, mental health care is not available, and admissions and releases are decided by faith healers.

According to the report, people staying at those facilities have no access to toilets leading them to urinate, defecate, eat, and sleep in a one to two meter radius.

“Imagine living in hell, it’s like that here,” said a 22-year-old woman with a psychosocial disability about the religious healing center she lived in.