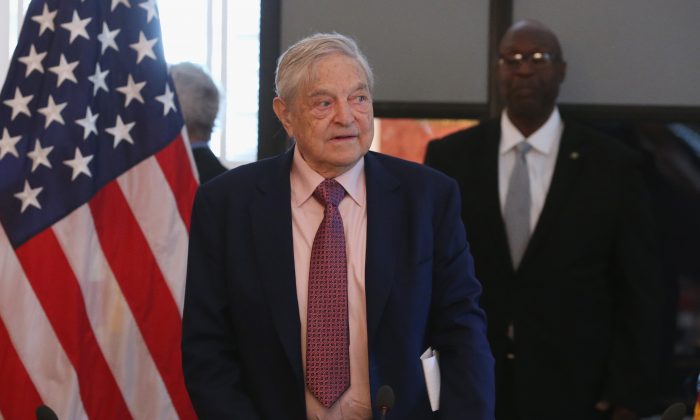 George Soros at the Blair House in Washington, D.C., on May 20, 2015. (Mark Wilson/Getty Images)
Politics

Billionaire investor George Soros, who is mainly noted for his funding of Democratic politicians and liberal groups, has met with other rich liberal donors in Washington, D.C. for a three-day, closed-door meeting on how to combat Donald Trump.

The conference, which started Sunday and is going until Wednesday, is being held at the Mandarin Oriental hotel, reported Politico, which said the meeting is sponsored by the Democracy Alliance donor club.

Soros committed or donated more than $25 million to boosting Hillary Clinton’s campaign as well as other Democratic candidates.

In another Politico report from June 2014, the Democracy Alliance has given as much as $500 million toward left-leaning candidates and activist groups since Soros helped found the group in 2005.

“The DA itself should be called into question,” an unnamed Democratic strategist active in the group told the website. “You can make a very good case it’s nothing more than a social club for a handful wealthy white donors and labor union officials to drink wine and read memos, as the Democratic Party burns down around them.”

The president of the group, Gara LaMarche, told donors on Sunday: “You don’t lose an election you were supposed to win, with so much at stake, without making some big mistakes, in assumptions, strategy, and tactics,” according to remarks that were prepared in advance and seen by Politico.

The DA requires all members to donate at least $200,000 per year to its approved activist groups. More than 100 “finance titans” belong the group, Politico said.

Trump’s first 100 days in office will be centered on restoring “honesty, accountability and change to Washington.”

There have been allegations that Soros-supported groups have been instigating protests and have been paying protesters—a claim he has denied through a spokesperson. “George Soros is not funding these (anti Trump) protests,” Soros spokesperson Michael Vachon told Front Page Magazine. “This is a fiction promoted by the alt-right.”