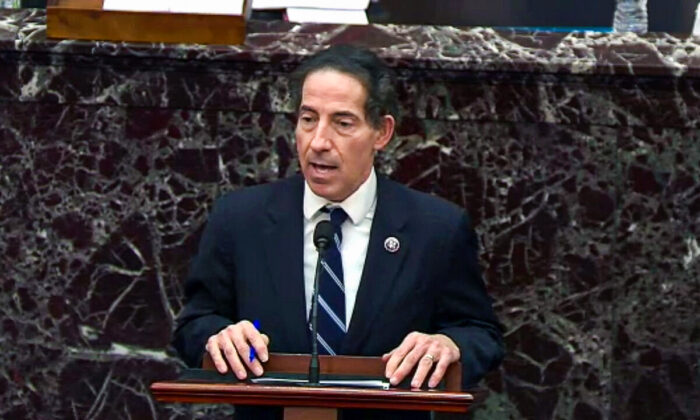 Rep. Jamie Raskin (D-Md.) has been accused of failing to disclose stock assets owned by his wife in contravention of U.S. law.

The American Accountability Foundation (AAF), a right-leaning watchdog group, sent a complaint to the Office of Congressional Ethics, saying that Raskin’s wife, Sarah Bloom Raskin, had waited too long to report stocks she received from a Colorado tech firm in payment for her work with the group.

U.S. law forbids people with insider information, such as members of Congress, from buying stocks on the basis of that information, and those who break these laws can be subject to criminal prosecution.

Laws against congressional insider trading were strengthened in 2012 amid a wave of insider trading in Congress; the STOCK Act, or Stop Trading on Congressional Knowledge Act of 2012, placed limitations and new reporting guidelines on federal lawmakers. Most critically, the law began requiring members of congress to disclose trades made by themselves, their spouses, or their dependent children publicly and quickly.

In a statement to Fox Business, AAF founder Tom Jones criticized the Raskins’ failure to disclose the major trade.

“Sarah and Jamie Raskin are career politicians who have used the system to enrich themselves, and it is time that someone holds them accountable,” Jones said. “If House rules are going to mean anything, the House Ethics Committee needs to open an investigation and sanction Jamie Raskin for hiding this shady stock deal from the public.”

Sarah Bloom Raskin was recently nominated by President Joe Biden for a top banking regulatory position at the Federal Reserve.

Raskin has already come under fire for past comments arguing that banks should face restrictions in lending money to the fossil fuel industry. But during confirmation hearings with the Senate, she claimed the opposite.

“I have to say, this is one of the most remarkable cases of confirmation conversion I have ever seen,” Sen. Pat Toomey (R-Pa.) quipped in response to Raskin, “although she doesn’t acknowledge the contradiction of what she has said today compared to the things she has been saying and writing for years.”

Rep. Jamie Raskin has acknowledged that he took too long to file the financial disclosure, but has said that this was in part due to the death of his and his wife’s son around the same time that the sale was made.

“We lost our son during the reporting period, and I filed the report late,” Raskin told Insider.

While AAF founder Jones said that it was appropriate to “afford some latitude” to the grieving parents in meeting filing requirements, he also noted that Rep. Raskin had wasted no time in leading impeachment proceedings against President Donald Trump around the same time.

Still, the Raskins’ violation of the STOCK Act is just one of dozens of violations that have occurred in the decade since the law was passed, leading some to suggest that the law should be changed to bar congressmen and their immediate family from stock ownership outright.

One recent effort to do just that was led by moderate Rep. Jared Golden (D-Maine), the only House Democrat to vote against Biden’s Build Back Better spending package in November. Golden gathered a sizable bipartisan coalition, including such unlikely pairings as left-wing progressive Rep. Rashida Tlaib (D-Mich.) and America First conservative Rep. Matt Gaetz (R-Fla.).

Speaking about the effort, Gaetz quipped that “Rashida Tlaib and I don’t often agree. But when we do, America should totally go that direction.”

There has been little progress on this front, as bringing legislation to the floor is largely under the jurisdiction of the House Speaker; Pelosi, however, has made clear that she opposes an outright ban.

“We have a responsibility to report [our trades] … [and] if people aren’t reporting, they should be,” Pelosi responded when asked whether a ban would be appropriate. But, she contended, “we’re a free market economy. [Members of Congress] should be able to participate in that.”

It is not yet clear whether the Office of Congressional Ethics will pursue an investigation of the Raskins, or how this discovery may affect Sarah Bloom Raskin’s confirmation prospects.