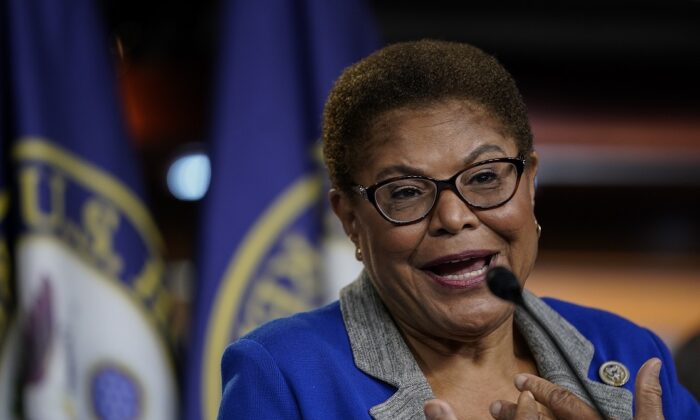 LOS ANGELES—Rep. Karen Bass (D-Long Beach) made it official Sept. 27, announcing her candidacy for mayor of Los Angeles in 2022.

“Our city is facing a public health, safety and economic crisis in homelessness that has evolved into a humanitarian emergency,” Bass said in a statement announcing her candidacy. “I’ve spent my entire life bringing groups of people together in coalitions to solve complex problems
and produce concrete change—especially in times of crisis. Los Angeles is my home. With my whole heart, I’m ready. Let’s do this—together. I’m running for mayor.”

“She’s a national leader in Congress—a job that has no term limits,” Assemblyman Isaac Bryan, D-Los Angeles, tweeted last week about a potential mayoral run from Bass. “Her running for mayor would be the greatest demonstration of love and commitment to the city I’ve ever seen … and we need it.”

Bass would be the first sitting House member to be elected mayor of Los Angeles since 1953, when Rep. Norris Poulson was elected. Then-Reps. James Roosevelt, Alphonzo Bell, and Xavier Becerra lost campaigns for mayor in 1965, 1969, and 2001.

Bass was elected to the House in 2010 and was chair of the Congressional Black Caucus from 2019-21. She was under consideration to be President Joe Biden’s 2020 running mate, but then-Sen. Kamala Harris (D-California) was chosen instead.

On her newly established campaign website, Bass touted her work in the state Legislature to fast-track “economic stimulus legislation” during the state’s economic crisis, as well as her passing “legislation to make health care more accessible and affordable for Californians” and spearheading efforts “to improve the child welfare system and provide tax credits to keep film production in California.”

Bass had been facing public pressure to run for mayor during recent weeks, and on Aug. 23, a California-based public opinion research firm released a poll that found more than a quarter of a sample of the city’s Democrats supported her against current and potential candidates in the 2022 election.

Ridley-Thomas and Martinez have both said they will not run for mayor in 2022.