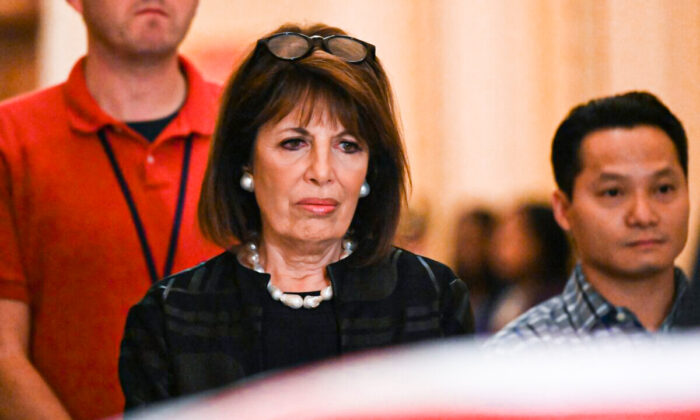 Rep. Jackie Speier (D-Calif.) announced that she won’t seek reelection in 2022, adding to the list of Democrats who aren’t seeking reelection.

In a video posted on Twitter on Nov. 16, Speier confirmed that she will retire from Congress at the end of her current term.

“Today, I am announcing that I will not be a candidate for reelection to Congress in 2022,” she said.”Time for me to come home, time for me to be more than a weekend wife, mother, and friend.”

Having represented California’s 14th District—which includes much of the San Francisco Peninsula—since 2008, Speier currently sits on the powerful House Intelligence Committee and the Committee on Armed Services. Notably, she was involved in the first impeachment inquiry into then-President Donald Trump starting in late 2019.

While she was working as a congressional aide in the late 1970s, Speier was shot five times when former Rep. Leo Ryan (D-Calif.) was assassinated in Jonestown, Guyana, by members of the Jim Jones-led People’s Temple. Jones, a self-described communist, led a San Francisco-based group of about 1,000 people that ultimately fled the United States to Guyana, leading to the Jonestown Massacre.

“It’s been an extraordinary privilege and honor to represent the people of San Mateo County and San Francisco at almost every level of government for nearly four decades,” Speier said.

She also referred to the Jonestown incident, where Ryan led a delegation to Guyana to investigate and rescue 900 members of the People’s Temple.

“Forty-three years ago this week, I was lying on an airstrip in the jungles of Guyana with five bullet holes in my body. I vowed that if I survived, I would dedicate my life to public service,” Speier said. “I lived, and I served.”

And in her announcement, she hinted that she isn’t finished with politics.

“There’s also another chapter or two in my book of life, and I intend to contribute to you, the communities I love, on the peninsula and in San Francisco and the country,” Speier said.

Her announcement comes just one day after Sen. Patrick Leahy (D-Vt.), the longest-serving senator in Congress, announced that he wouldn’t seek reelection in 2022.

Speier is the 14th House Democrat to indicate that they won’t seek reelection in 2022, which could be an ominous sign for Democrats and President Joe Biden’s administration as they continue to grapple with Virginia’s gubernatorial race being won by a Republican, as well as suffering losses in other places earlier this month. Generally, the party of the president loses congressional seats in the midterms.

Before being elected to Congress, Speier also served in California’s Legislature in both the state Senate and state Assembly. Her seat is considered very safe for Democrats, as Biden won her district by 57 percentage points over Trump in 2020.

Correction: Speier’s party affiliation has been corrected. The Epoch Times regrets the error.