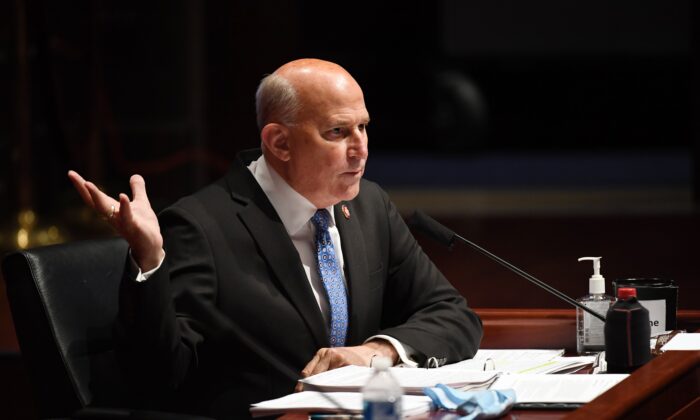 Rita Li
Rita Li is a reporter with The Epoch Times, focusing on U.S. and China-related topics. She began writing for the Chinese-language edition in 2018.
View profile
Follow
and Kay Rubacek

Rep. Louie Gohmert (R-Texas) said a diplomatic boycott of the 2022 Winter Olympics won’t “make much difference at all” regarding the Beijing regime’s human rights violations and that it’s a waste of diplomatic leverage.

“I don’t think it will make any difference in China’s human [rights] or their discrimination or the abuses of different peoples,” Gohmert told NTD, a sister outlet of The Epoch Times, on Dec. 10.

The United States announced on Dec. 6 that it won’t send an official delegation to Beijing for the 2022 Games in protest against the Chinese regime’s ongoing human rights crisis in Xinjiang. Australia, Canada, and the UK have since followed suit.

The move allows U.S. athletes to still compete if they wish to do so. Yet, Gohmert said, even an athletes’ boycott would be unlikely to effectively restrain authoritarian regimes, as the one doing the punishing would have more to lose.

“We had a president named Jimmy Carter, who was one of the least effective presidents we’ve ever had on foreign affairs,” he said. “And he did a lot like [President] Joe Biden, where he thinks he can just be nice and convince people that have a little bit of evil in them to do the right thing.

“It doesn’t work that way.”

Four decades ago, the 1980 U.S. Olympic team lost its chance to compete in Moscow after then-President Carter announced a boycott in response to the Soviet invasion of Afghanistan in late 1979.

“Russia wasn’t really hurt, they went on,” Gohmert said. “The people that were really hurt were the athletes, the American athletes paid the price of having a weak, ineffective president.”

That shouldn’t have been the case, according to Gohmert. He said everything involved with foreign diplomacy or business relations is all about leverage.

“And when you give away your leverage for nothing, then you’re not going to have anything to negotiate with,” he said. “In order to be effective, they would have to demand better treatment for whomever they chose, whether it’s the Uyghurs, the Christians, or Falun Gong—whomever. You have to take that stand before you cut your billion-dollar deals.”

Yet, efficiency is the shortcoming of the Biden administration, according to Gohmert.

“Nobody’s afraid of him,” he said of Biden. “Nobody thinks he’s going to do anything to stop them.”

Biden confirmed on Dec. 8 that sending U.S. troops to Ukraine in the event of a Russian invasion is “not on the table.”

“If you’re going to be effective, you don’t take anything off the table,” Gohmert said.

Yet Biden told Russian President Vladimir Putin during a recent video call that the United States and its allies would respond “with strong economic and other measures” over a potential attack by Russia.

Earlier this month, Gohmert introduced a bill to impose duties on Chinese merchandise because of China’s ongoing intellectual property theft, which costs the United States “billions and billions of dollars per year.”

On Dec. 10, Washington banned U.S. investment in a Chinese artificial intelligence firm over concerns regarding its role in aiding the Chinese regime’s repression of Uyghurs in Xinjiang. The move was among an announced suite of sanctions that targeted 24 other individuals and entities tied to Beijing, Burmese military entities, and North Korea, marking International Human Rights Day.