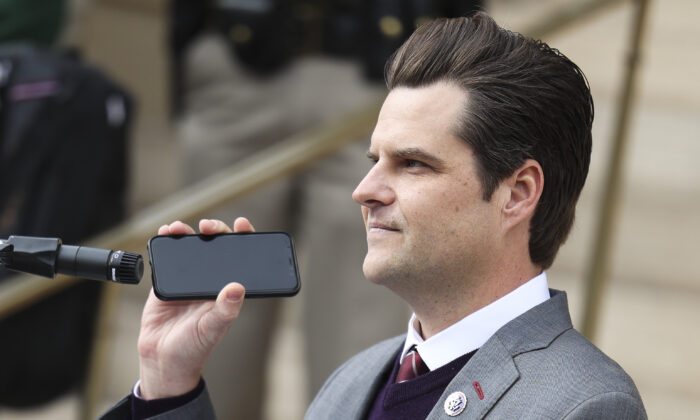 Rep. Matt Gaetz (R-Fla.) holds a phone to the microphone as Donald Trump Jr. speaks remotely to a crowd during a rally against Rep. Liz Cheney (R-WY) in Cheyenne, Wyo., on Jan. 28, 2021. (Michael Ciaglo/Getty Images)
Republicans

Rep. Matt Gaetz (R-Fla.) said on March 30 that he is under investigation by the Department of Justice (DOJ) over “sexual conduct with women” and denied any criminal wrongdoing, including allegations that he had a relationship with a teenage girl.

His remarks follow a New York Times report stating that Gaetz, who represents parts of western Florida, allegedly had a sexual relationship with a 17-year-old girl and paid for her to travel with him. The report cited three unnamed sources briefed on the matter.

The sources suggested that Gaetz, 38, may have violated federal sex trafficking laws that prohibit an individual from inducing someone under the age of 18 to cross state lines to engage in sex in exchange for money or something of value.

The probe into the matter was opened by then-Attorney General William Barr’s DOJ during the final months of the Trump administration.

Gaetz, a prominent conservative in Congress, refuted the allegations in a March 30 interview with Axios, claiming that he was the subject of an investigation “regarding sexual conduct with women” but that he wasn’t a target of the probe.

A subject is conventionally thought of as someone whose actions fall within the scope of a criminal investigation, whereas a target is someone whom prosecutors have gathered evidence linking to a crime. But during the course of an investigation, a subject can become a target.

“The allegations against me are as searing as they are false,” Gaetz told the news outlet. “I believe that there are people at the Department of Justice who are trying to criminalize my sexual conduct, you know when I was a single guy.

“I have definitely, in my single days, provided for women I’ve dated. You know, I’ve paid for flights, for hotel rooms. I’ve been, you know, generous as a partner. I think someone is trying to make that look criminal when it is not.”

He said that he was “absolutely” confident none of the women with whom he’d had sexual relations were minors.

Gaetz told The Epoch Times in a statement that he believes the allegations are rooted in an “organized criminal extortion involving a former DOJ official seeking $25 million while threatening to smear my name.”

He didn’t specify who could be behind the plot, but named former lead attorney for the DOJ’s Organized Crime Task Force, David McGee, as being involved in the alleged extortion attempt. The Epoch Times has reached out to McGee for comment.

“This is a blatant attempt to distract from the fact that Matt Gaetz is apparently about to be indicted for sex trafficking underage girls,” he said.

Gaetz told The Epoch Times that his family has been cooperating with the FBI and said his father was wearing a recording device, at the FBI’s direction, “to catch these criminals.”

He demanded the DOJ release the recordings “which implicate their former colleague in crimes against me based on false allegations.”

“No part of the allegations against me are true, and the people pushing these lies are targets of the ongoing extortion investigation,” he said.