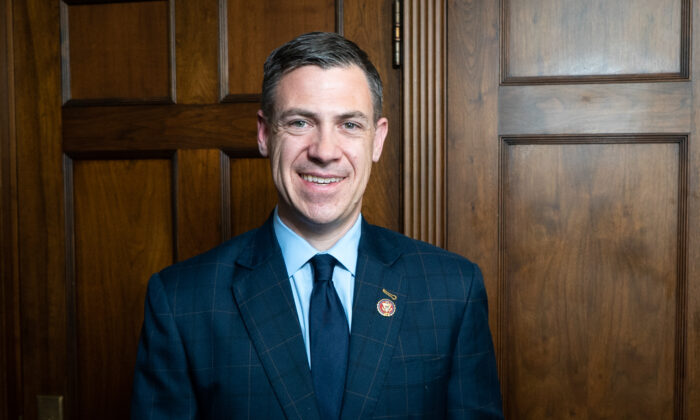 For the first time in its history, the Republican Study Committee (RSC)—the largest conservative caucus on Capitol Hill—will make countering the Chinese Communist Party (CCP) a key part of its agenda under the leadership of its newly elected chairman, Rep. Jim Banks (R-Ind.).

As part of this large-scale effort, Banks said that he and others in the House committee will introduce more than 20 bills this week alone dedicated to confronting the China threat and holding the Biden administration accountable for weak policies on China.

The legislative barrage will touch upon a wide range of issues broadly focused on pushing back against the CCP’s influence in the United States.

“We’ve made countering communist China a platform of the RSC for the first time, under my leadership,” Banks told The Epoch Times. “It deserves our attention, and as the largest caucus, our members understand this is the greatest threat that we face and that we have to confront it.”

The focus on the CCP is “uniformly supported within the caucus,” said Banks. During the 116th Congress, there were 148 members of the committee, which accounted for nearly 75 percent of Republicans.

Banks said the caucus is in some ways an “internal policy think tank within the Republican Conference” that is dedicated to upholding conservative principles.

As part of this agenda, there will be full-time staff in the RSC devoted solely to this effort. The committee will also bring in leading think-tank experts to help craft policy solutions, according to Banks.

Banks is introducing a number of measures including the “Stop Funding the PLA Act,” which will protect U.S. investments from flowing to China’s military-industrial base. Other RCS members are introducing legislation that would stop Biden from removing Huawei from the Commerce Department’s entity list and legislation to stop Biden from lifting sanctions on People’s Liberation Army-linked firms.

The RSC will continue this effort in the long term. Banks said countering Beijing will be a “very top priority for our organization over the next couple of years.”

During a town hall on Feb. 16, Biden appeared to downplay the genocide against the Uyghur population in China by saying that different countries and their leaders can be expected to follow “different norms.” The president’s comments sparked criticism, and Banks described them as “deeply, deeply troubling.”

“I’m not quite sure what to make of it,” he said. “It’s so off the wall and wrong. It’s really hard for me to wrap my head around.”

A number of Biden’s Cabinet have made friendly overtures to the CCP, Banks said. In confirmation hearings, several members of Biden’s administration declined to call the CCP an adversary and pivoted instead toward Biden’s definition of China as a key global competitor.

On his first day at the job, Secretary of State Antony Blinken—who has a decades-old relationship with Biden—told reporters the U.S.–China relationship is “arguably the most important relationship that we have in the world.”

Blinken said he favors cooperation with China on climate change and other issues of shared concern, while also endorsing the determination made by the previous administration that China is committing genocide against Muslims in Xinjiang.

Meanwhile, Rhode Island Gov. Gina Raimondo, Biden’s nominee to be secretary of the Department of Commerce, has refused to commit to keeping Huawei Technologies on the Commerce Department’s Entity List, which would stop it from acquiring U.S. technology.

Banks said the friendly approach toward China is “deeply concerning” and pointed out that Biden has refused to directly call China a threat, in contrast to how former President Donald Trump handled the country. Under the Trump administration, the United States escalated its countermeasures and employed a more hard-hitting approach toward countering Beijing.

Biden spoke with Chinese leader Xi Jinping on Feb. 10. According to a readout of the call, they discussed China’s unfair economic practices, the suppression in Hong Kong, human rights abuses in Xinjiang, and assertive actions in the Indo-Pacific region, including toward Taiwan.