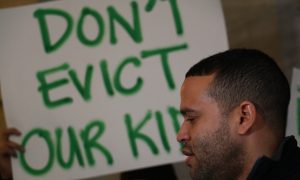 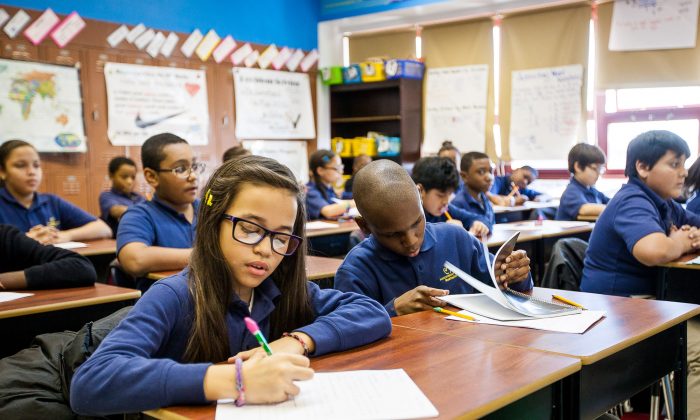 Matt Gnaizda
Matt Gnaizda is a multimedia journalist who shoots video, writes, edits, and produces programming for New Tang Dynasty (NTD) Television and its media partner, Epoch Times. He has traveled to more than 20 countries and currently lives in Brooklyn, New York. As a journalist for more than a decade, Matt has covered a wide variety of topics, but has a special focus on Chinese politics, economics, and human rights.
View profile
Follow
biggersmaller
Print

NEW YORK—The brightly painted blue and green hallways at Achievement First Bushwick, a charter school in Brooklyn, contrast sharply with the thick, dull tiles that cover the walls of I.S. 383, the public school it shares a building with.

If Mayor Bill de Blasio puts his campaign promise into action, one of these public schools, and not the other, will have to pay rent.

“It makes me nervous,” said Mike Rosskamm, principal of Achievement First Bushwick. By one estimate, his school could be looking at more than $850,000 a year in rent.

“Charging rent would take a big hit out of our budget, and would not allow us to serve our kids in the way we’re serving them now,” said Rosskamm.

Achievement First Bushwick teaches 370 students in grades five–eight. They occupy most of the fourth floor of a large red brick building near the Knickerbocker Avenue stop on the M subway line. I.S. 383, whose principal declined to comment for this story, occupies floors one through three. The two co-located schools share an auditorium, cafeteria, gym, and playground.

“There’s a high demand for schools like our school, specifically, because we’re doing really, really well in this community, especially relative to the district. And so parents are really invested in trying to get their students into school here,” said Riley Bauling, academic dean at Achievement First Bushwick.

Achievement First Bushwick is funded with public money from the city, state, and federal governments, just like regular public schools. It also receives some private philanthropic funding. As is required by law, it has no academic requirements for admission. Instead, it accepts students through a lottery, weighted in favor of children from the neighborhood. Most of its students started at an Achievement First elementary school, and moved up through its system.

Clive Campbell is one of those students. He is in the fifth grade now, and has attended Achievement First schools since kindergarten.

“I like the learning that we do and the teachers,” said Clive. “If we don’t understand it, they’ll help us.”

Back in October, Clive was 1 of more than 200 children from his school joining thousands of students, parents, and teachers in a protest where they walked across the Brooklyn Bridge. That protest was over de Blasio’s plan to charge co-located charter schools rent.

There is no official word yet on how much the rent would cost, but a report by the city’s Independent Budget Office in December gives a clue. It said that building-related costs at public schools are about $2,320 per student, per year, and that charging that amount in rent to charter schools in co-located buildings would yield $92 million citywide. If this rental rate were applied to Achievement First Bushwick’s 370 students, it would cost them $858,400 per year.

Charter schools never paid rent for co-locating with public schools under Mayor Michael Bloomberg. They were, in his view, also a type of public school—even though they are independently run.

And for 12 years, charter schools boomed. When Bloomberg took office in 2002, there were just 17 charter schools in New York City. There are now 183, serving over 70,000 students.

Not all charter schools in the city are as successful as Achievement First, but on average they perform better than non-charter equivalents. On last year’s state exams, charter school students scored about 5 percentage points higher on average.

One important difference is the teachers.

Teachers at most charter schools are not part of the United Federation of Teachers (UFT), the powerful teachers union that sets policy for the hiring, firing, and promotion of teachers.

Bloomberg famously did not get along with the UFT. De Blasio famously does. He accepted its endorsement for his recent election campaign.

The UFT does not oppose all charter schools. It only opposes the 161 of them whose teachers are not part of its union. And more specifically, the 60 percent of charter schools that are co-located with UFT-staffed public schools.

UFT President Michael Mulgrew wrote in a Jan. 14 Daily News op-ed that Bloomberg unfairly singled out charter schools for “special treatment.” That special treatment included giving many of them free space in existing public school buildings, like in Bushwick. Because rent is free, and co-located charter schools get to share some of the existing amenities (like janitorial support and security), their effective annual per-pupil funding allocation is several hundred dollars higher than what non-charter schools receive.

Part of what makes a nonunionized school like Achievement First Bushwick different is its system for keeping and promoting the most qualified teachers. It doesn’t have a tenure program, said Rosskamm. Instead, teachers are on one-year contracts. When they do well, they are promoted faster and paid more. If teachers underperform, or are simply not a good fit for the environment, it is easier to let them go.

Thirty-three-year-old Zakia Cox teaches fifth grade at Achievement First Bushwick. She used to work as a UFT teacher at a New York City public school, but came here two years ago. She said that at Achievement First she can spend more of her time teaching, and less time doing administrative work, such as curriculum planning.

“I feel like some of the load is lifted off of me, so I can concentrate solely on the execution of my instruction,” said Cox.

“Our teachers work incredibly hard,” said Rosskam, who asks most of his teachers to show up by 7 a.m. “Our dedication is to making sure our kids are going to be successful in college, and so that’s what we think about all the time.”

Matt Gnaizda
Follow
Matt Gnaizda is a multimedia journalist who shoots video, writes, edits, and produces programming for New Tang Dynasty (NTD) Television and its media partner, Epoch Times. He has traveled to more than 20 countries and currently lives in Brooklyn, New York. As a journalist for more than a decade, Matt has covered a wide variety of topics, but has a special focus on Chinese politics, economics, and human rights.
TOP NEWS